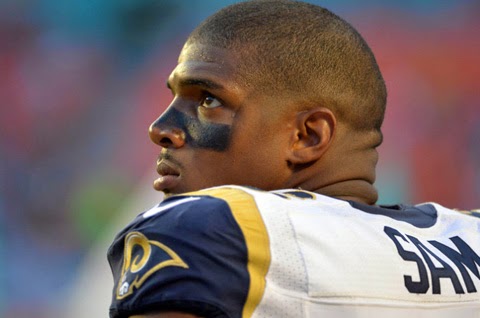 UPDATE: CBS News is reporting that Sam met with Rams coach Jeff Fisher today after clearing waivers.  CBS says that Sam looks unlikely to sign on for the Rams 10-man practice squad due to the team’s depth of talent on the current defensive roster.

After being released from the St. Louis Rams, Buzzfeed’s Logan Rhoades reports that no team claimed Michael Sam.

Once the Rams dropped Sam from their final roster, he was on “waivers,” meaning that other NFL teams had until noon today to take him. Based on last year’s win-loss record, the worst team in the league had the first chance to pick him up, and the best team had the last chance.

Still, Sam can sign to the practice squad for any NFL team — and the Rams are expected to sign him to their 10-man practice unit, according to league sources cited by ESPN.

After being released yesterday, several sources were of the opinion that he was cut due to the already strong defensive line of the St. Louis Rams.

BUT – his preseason stats (11 tackles, 3 sacks) definitely make him worthy of a roster position somewhere in the league. Many, including folks over at OutSports, said that should Sam NOT get picked up by another team it would indicate that homophobia was indeed in the mix here.

I’d be curious to know if there were any rookies who made their rosters with lesser stats?

Michael Sam has not been told of any teams that claimed him on waivers. Appears he went unclaimed. Now free to sign with a practice squad.
— Adam Schefter (@AdamSchefter) August 31, 2014

Unless somebody put in a claim at the last minute, Michael Sam cleared waivers and will be a free agent.
— Tom Pelissero (@TomPelissero) August 31, 2014