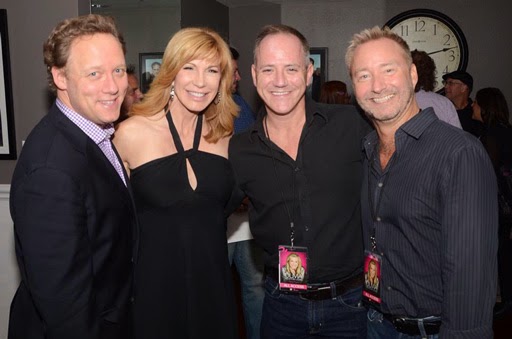 A highlight of this weekend was getting to catch up with FAB Leeza Gibbons and her handsome hubby Steven Fenton.

Leeza and Steven came to Vegas to catch her “Great Walk of China” pal Olivia Newton-John in concert at the Flamingo Las Vegas at her sold-out “Summer Nights” show.

After the show, we all headed over to Chayo (dee-lish) for a birthday celebration for Steve Real, Olivia’s vocal coach and backup singer.

I adore Leeza.  She is one of the easiest peeps to sit and talk with.  It’s not common in celeb circles but Leeza is one of the few famous folks who listens to you talk.  And she connects and hears what you’re saying.

What could be better than Mexican food and catching up with friends on a Friday night in Vegas?

Btw – no official announcement has been made yet, but I internet rumors say Leeza is on the next season of Celebrity Apprentice.  If so, watch her.  She’s smart and so good with people, I’d expect her to go far in the game.