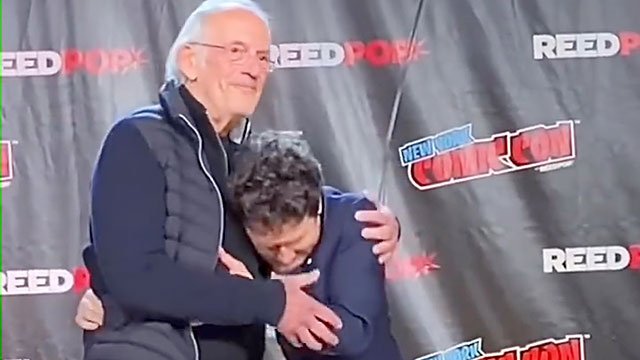 • Twitter: Back To The Future stars Michael J. Fox and Christopher Lloyd were reunited today in New York City at Comic Con.

• Boy Culture: Matt Rettenmund reviews the new off-Broadway offering, The Village, a Disco Musical! “This 60-minute show slowly reveals itself to have wit, fangs, a big heart and impressively fresh takes on nostalgia and death. But again, the important part is: It’s funny.”

• The Advocate: A new book claims Mick Jagger had ongoing sexual relationships with two other members of the Rolling Stones.

Mick Jagger had flings with both men and women, claims author Lesley-Ann Jones — but one relationship went deeper than the rest. https://t.co/Ycwb2dlUF4

• New York Times: As the National Archives continued to urge Donald J. Trump to return boxes of records he had taken from the White House, he reportedly came up with an idea late last year to trade them for the FBI’s documents from its investigation into his 2016 campaign’s ties to Russia.

• Pink News: Footballer Iker Casillas has clarified that he is not gay, claiming that a “coming out” tweet was posted by hackers. “Apologies to all my followers,” he wrote afterward. “And of course, more apologies to the LGBT community.”