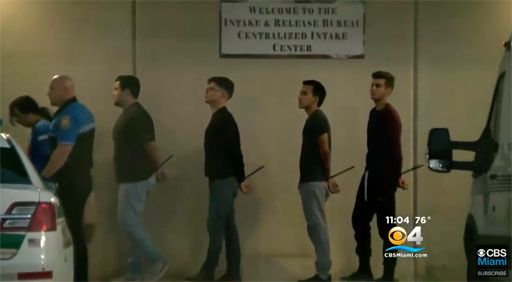 Miami’s local ABC affiliate WSVN reports that the young men accused of a violent gay bashing after Miami Beach Pride this past Sunday have been released on bond after being arrested and charged with felony aggravated battery.

Surveillance cameras outside the Miami Beach bathroom, located near the beach along Ocean Drive and Sixth Street, recorded the assault on Sunday night.

Investigators said the subjects yelled an anti-gay slur in Spanish before the brawl ensued.

The State Attorney’s Office is still deciding whether the suspects will be charged with a hate crime.

You can find my original reports on the attack here and here.

I can assure you & our community that my Hate Crimes Unit will evaluate this incident thoroughly. They have been working with @MiamiBeachPD since it occurred. Hate crimes can be enhanced under Florida law. #EqualityForAll https://t.co/k4h6C7zRCm