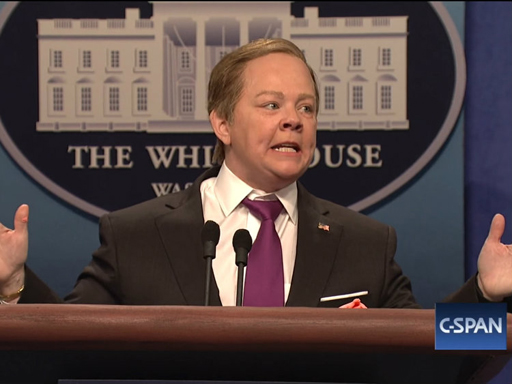 Sean Spicer may be gone from the White House, we’ll always have Melissa McCarthy’s hysterical, over the top portrayal of the former White House press secretary on Saturday Night Live to relish.

And just to show “Spicey” is the gift that keeps giving, McCarthy must be relishing her new Emmy Award she picked up last night at the Creative Arts Emmy Awards. That statue sitting on McCarthy’s mantle was for her hosting gig on SNL including her performance as the manic, unhinged press secretary.

You’ll recall the portrayal got so much attention Trump pulled Spicey from press briefing duties and sent Sarah Huckabee Sanders in his place.

At the time of McCarthy’s appearances as “Spicey,” Sean attempted to blow off the jabs with faux good sportsmanship. But his true colors showed when he commented that SNL had “gone from being funny to just bad.”

This is McCarthy’s second Emmy win having previously won for CBS’ Mike & Molly. I’m not surprised to learn she has been nominated for all five of her hosting gigs on SNL.

The main Emmy broadcast will air Sunday, Sept. 17 on CBS.

But for now, let’s take a trip on the “way back machine” and enjoy McCarthy’s brilliant, no-holds barred performance below.