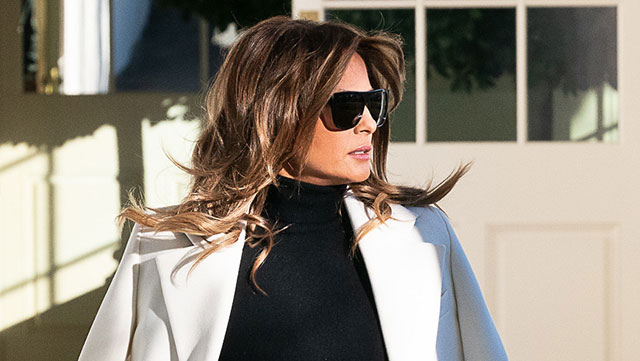 The Washington Blade’s Chris Johnson reports that First Lady Melania Trump wanted to light up the White House in rainbow colors this past June in honor of LGBTQ Pride Month, but with Donald Trump’s homophobic Chief of Staff Mark Meadows in the mix, the idea was never carried out.

Meadows had a significant role, one Republican source said on condition of anonymity, in ensuring the Trump White House ignored Pride Month, which is why President Trump didn’t send out a tweet to recognize the annual LGBTQ celebration as he did in 2019. It wasn’t immediately clear whether Meadows weighed in specifically on shutting down the rainbow lighting proposal at the White House.

Earlier this year, in an article on the Trump campaign’s plan to engage in unprecedented LGBTQ outreach for a Republican presidential nominee, the New York Times reported several aides suggested he send out a tweet this year recognizing June as Pride Month. That didn’t happen.

In contrast, Trump in 2019 tweeted out a message recognizing Pride Month, becoming the first Republican U.S. president to recognize the annual LGBTQ celebration. But 2019 was before Meadows came to the White House.

The First Lady later recorded a video message for the Log Cabin Republicans wherein she declared she was “shocked to discover” that folks perceived “my husband as anti-gay or against equality.”

Prior to joining the White House in March 2020, Meadows represented North Carolina’s 11th congressional district where he accrued a consistently anti-LGBTQ record.

In addition to voting against the Equality Act, which would add sexual orientation and gender identity to existing federal civil rights laws, he voted in favor of prohibiting the U.S. military from paying for transition-related care for transgender service members.

Meadows was also a vocal opponent of legalizing same-sex marriage. In a 2013 interview, he hysterically declared marriage equality would be a ‘constitutional crisis‘ if the U.S. Supreme Court made it a reality (which it did in 2015).

“It’s a huge invasion into state’s rights and the state definition of marriage, whether you call it traditional or natural marriage,” Meadows said at the time. “I call it marriage, you know, it’s between one man and one woman, period.”

Meadows consistently received a rating of “zero” on the Human Rights Campaign’s congressional scorecard during his time in the House.