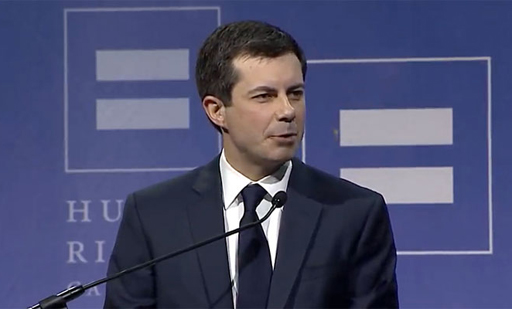 The 37-year-old from South Bend, Indiana, used the speech to address what some have viewed as a possible vulnerability as he competes for the Democratic nomination for president, and that’s being a white male from the Midwest when many in his party feel a woman or person of color would best represent today’s Democratic Party.

Buttigieg spoke of his own experiences as a gay man in a predominantly straight society. But he also pushed back on the idea that people of different marginalized groups share in “equivalencies” in how they have experienced discrimination.

“I may be part of the LGBTQ community, but being a gay man doesn’t even tell me what it’s like to be a trans woman of color in that same community, let alone an undocumented mother of four or a disabled veteran or a displaced autoworker,” he told the audience assembled at Caesars Palace on the Las Vegas Strip.

Mayor Pete warned of a “crisis of belonging in this country,” saying that “so-called identity politics” that underscore how one person hasn’t walked in another’s shoes only exacerbates our differences.

“Something that is true,” acknowledged the Harvard and Oxford grad. “But, it doesn’t get us very far.”

The mayor noted that identity politics often serve to divide folks who have more in common than less.

“The more you know about exclusion, the more you think about belonging”

“The wall I worry about most isn’t the president’s fantasy wall on the Mexican border that will never get built anyway,” he said, referencing Donald Trump’s infamous border wall. “What I worry about are the very real walls being put up between us as we get divided and carved up.”

“And what every gay person has in common with every excluded person of every kind is knowing what it’s like to see a wall,” he continued. “I am ready to use my story, my energy, my alliances, and yes, my privilege, to throw myself into tearing down those walls.”

“Each of us has a story that can either separate us, or connect us to those around us,” he added. “Yes, I am gay, and I am the son of an immigrant, and an Army brat, and I’m a husband, and I am a musician, and I’m an Episcopalian. And I’m a Democrat.” 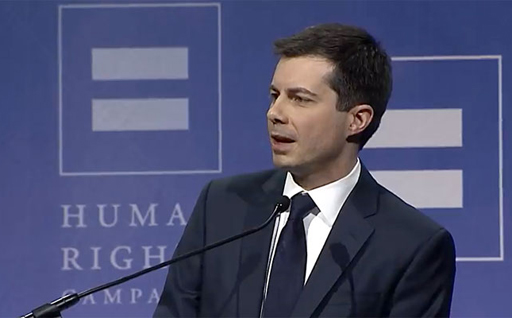 “We can’t let this election be about the president,” he said. “Because if Americans see us spend all our time talking about him, they’ll be left with the question: ‘Who is talking about us?’”

Buttigieg urged Democrats to start talking not only about their policies, but the values behind those policies.

“It’s time for us to get comfortable once again talking about values … like freedom,” he said. “We have allowed conservatives to monopolize the language of freedom. But we know that freedom isn’t just about freedom from, it’s about freedom to. Not just freedom from regulation, but freedom to live a life of your choosing.”

The HRC appearance capped a west coast campaign swing that included fund-raisers at the home of Gwyneth Paltrow, and another at The Abbey, a popular West Hollywood gay bar.