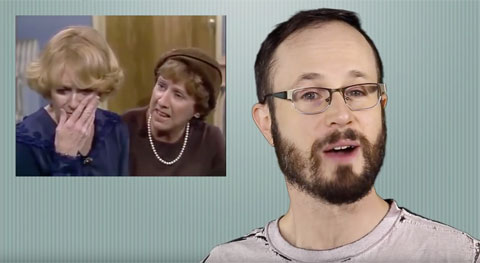 When did gay partners become a part of the family on TV? October 9, 1977. That’s the night CBS aired an All in the Family episode entitled “Cousin Liz,” which in just a half hour did three amazing things: it showed America that they could have queer family members. It depicted what may be TV’s first gay marriage. And oh yeah it may have changed the course of an election.

I haven’t thought about this episode since it aired in 1977, but I do remember it. At the time I must have been 14 years old. I didn’t exactly know I was gay yet, but it lodged in my consciousness.

Baume does a great job of breaking down how the storyline at first goes all “comedy” on the idea of a lesbian couple. But then, as only “Edith” could do when given the chance during All In The Family, she steps past the “dingbat” and becomes our teacher.

Definitely worth the watch. Make sure you check the moment at the 5:05 mark.