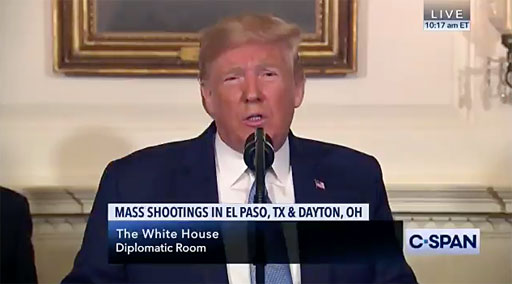 Donald Trump denounced white supremacy, racism and bigotry on Monday as he addressed the two mass shootings that occurred over the weekend.

“In one voice our nation must condemn racism, bigotry and white supremacy,” Mr. Trump said.

But Mr. Trump stopped well short of endorsing the kind of broad gun control measures that activists and Democrats have sought for years, instead falling back on time-honored Republican remedies, calling for stronger action to address mental illness, violence in the media and in video games.

He warned of “the perils of the internet and social media” with no acknowledgment of his use of those platforms to promote his brand of divisive politics.

It remained unclear whether Mr. Trump’s 10-minute remarks after one of the most violent weekends in recent American history could place him in a position to unify the nation when many Americans believe he is personally responsible for inflaming racial division. He took no responsibility for the atmosphere of division, nor did he recognize his own reluctance to warn of the rise of white nationalism until now.

The First Lady and I join all Americans in praying and grieving for the victims, their families, and the survivors. We will stand by their side FOREVER! pic.twitter.com/zOQLvAuXoh

TRUMP: “In one voice, our nation must condemn racism, bigotry, and white supremacy.” pic.twitter.com/BaJp6bhWjG

Today, I am also directing the Department of Justice to propose legislation ensuring that those who commit hate crimes and mass murders face the DEATH PENALTY – and that this capital punishment be delivered quickly, decisively, and without years of needless delay. pic.twitter.com/BDXdpelK7F

Trump, struggling with a bad case of what appears to be dry mouth, falsely claimed the Ohio mass shooting took place in Toledo. (It happened in Dayton.) pic.twitter.com/dzOcsIV5ox

Trump said, “may God bless the memory of those who perished in Toledo,” but the shooting happened in Dayton, Ohio.