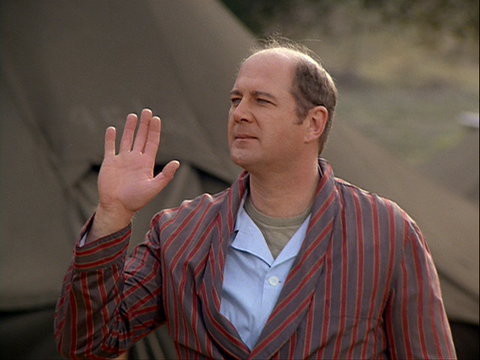 David Ogden Stiers, famous for his role as the loveably arrogant “Maj. Charles Winchester” on the hit television show MASH, has passed away at the age of 75.

His agent, Mitchell K. Stubbs, shared that the versatile actor passed after a “courageous battle” with bladder cancer.

I am very sad to report that David died this morning March 3, 2018 peacefully at his home in Newport, Oregon after a courageous battle with bladder cancer.

His talent was only surpassed by his heart. pic.twitter.com/fjuGmbVYgd

His work on MASH earned him two Emmy nominations, and he garnered a third for the NBC mini-series The First Olympics: Athens 1896.

Stiers also enjoyed great success in voiceover work, most famously lending his talents to the blockbuster Disney film Beauty And The Beast where he voiced the role of “Cogsworth.” Other notable voiceover work included The Hunchback of Notre Dame and Pocahontas.

He was no stranger to Broadway either having made his debut on the Great White Way in The Three Sisters in 1974. He returned to the Broadway stage many times in productions including The Magic Show and Irving Berlin’s White Christmas.

Stiers came out as gay in 2009 during an interview with a gay publication in Oklahoma.

“I am [gay],” Ogden Stiers said. “Very proud to be so.” Like many actors, his coming out happened later in life as he feared backlash for his career.

But he added, “I wish to spend my life’s twilight being just who I am.”

I could post dozens of MASH moments from Stiers’ career, but Ryan Shea at Instinct reminds us of an appearance on Frasier back in May of 2003 where Stiers played a character much like “Frasier Crane” but later in the episode came out as gay with deft poignancy.

David Ogden Stiers. I remember how you skateboarded to work every day down busy LA streets. How, once you glided into Stage 9, you were Winchester to your core. How gentle you were, how kind, except when devising the most vicious practical jokes. We love you, David. Goodbye.

We lost an Extraordinary person and artist; David Ogden Stiers
Working with him was a gift
He will be missed by me and by so many