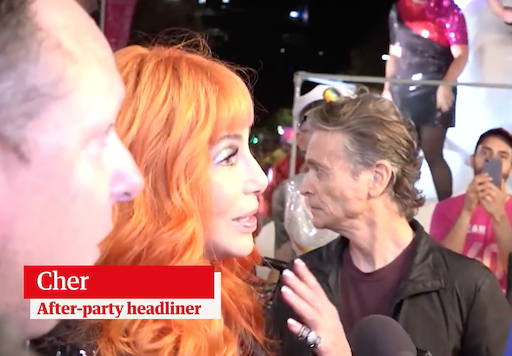 Thrilling her fans ‘down under,’ Cher dazzled the packed crowd of over 300,000 at Sydney’s Gay & Lesbian Mardi Gras last night delivering a 20 minute set that included hits like “All or Nothing,” “Strong Enough,” “Believe,” and “If I Could Turn Back Time.”

The international icon also made a surprise appearance earlier in the evening during the parade.

The singer, sporting bright orange hair and a low-cut black top with a silver-embroidered jacket, mingled with her many fans.

She said she loved the feeling of the parade and even chimed in about Australia’s passing of same-sex marriage laws.

The American singer praised the Mardi Gras and said she wished she had attended one earlier.

“I love that everybody is having such a good time and there’s no feeling of any kind of anger, there’s no negativity and that’s what I like most,” Cher said.

“All the people with everything hanging out, and fabulous girls with their slap on and big hair and no clothes – I love it.”

Check out Cher’s after-party performance below.