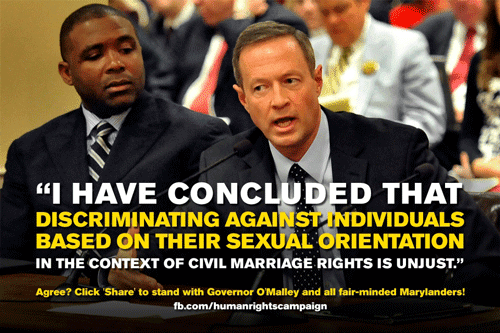 Lawmakers in the Maryland House voted today in favor of marriage equality in their state for the first time.

Gov. Martin O’Malley has pushed for the law and pledged to sign it.

The Maryland House of Delegates needed 71 votes to pass the bill. Whether the chamber had the requisite votes was a matter of high speculation just hours before the vote. Pro-marriage equality lawmakers on Thursday had to delay consideration of the legislation until today, when it passed 71 to 67 as cheers erupted from the gallery and on the floor.

Delegate Anne Kaiser, a lesbian, said during debate of the bill that her parents had hoped she “finds someone to love.” Then, “I have, and I wish to be married.” Delegate Maggie McIntosh, who come out as a lesbian while serving in the House, said “We seem to be on a roll.”