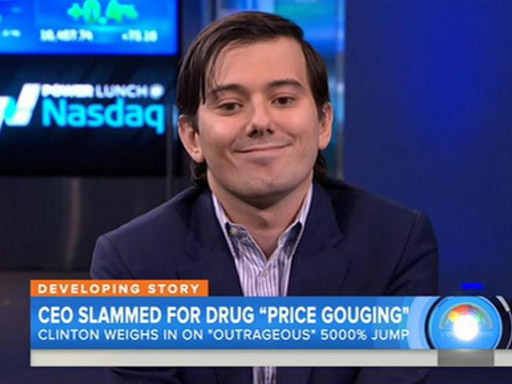 Apparently, Martin Shkreli — the “pharma bro” who raised the price of an important AIDS and cancer medication by 5000% — thought he could buy access to the Bernie Sanders presidential campaign.

The little weasel made a maximum campaign donation of $2,700 hoping for face time with Sanders, but the campaign turned around and donated it to the Whitman-Walker health clinic in Washington instead.

Pharmaceutics CEO Martin Shkreli wanted to make a donation to Bernie Sanders’ campaign in order to get a meeting with the Vermont senator, according to Stat. The Sanders campaign said no thanks. They’ll be passing on the money to a Washington health clinic, and Shkreli—the so-called “most hated” man in America whose company, Turing Pharmaceuticals, raised the price of an AIDS drug from $13.50 to $750 a pill—will not be getting to meet with the Democratic presidential candidate.

In an interview Thursday with Stat, Shkreli said he was “furious” Sanders was using him as a punching bag after he made the maximum allowed individual contribution, $2,700, to the candidate’s campaign, so that the two could meet and discuss their differences. But Shkreli, who tweeted his support for Sanders during Tuesday’s debate, may be looking in the wrong place. “We are not keeping the money from this poster boy for drug company greed,” Sanders spokesman Michael Briggs told Stat, saying the $2,700 will be donated to the Whitman-Walker health clinic in Washington.