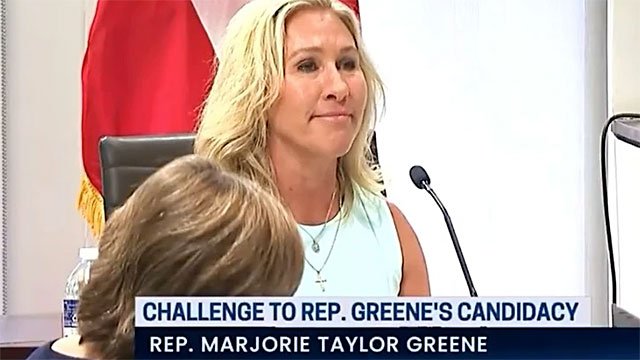 QAnon Rep. Marjorie Taylor Greene can’t ‘recall’ just about anything regarding the January 6 invasion of the U.S. Capitol building per her testimony at a hearing which will determine if she will be allowed to be on the ballot for reelection.

Greene’s inability to remember hardly anything about anything may feed into questions whether she is mentally fit to hold office.

In this case, I think “I don’t recall” is just another way of Taylor saying “I refuse to be held accountable for my words/actions, but pleading the 5th might make me look bad.”

It’s important to note that there’s evidence to support all the things she couldn’t “recall.”

Greene’s appearance in a court was to determine if she violated a Civil War era provision that would disqualify her from running for re-election in Georgia due to her involvement in the failed January 6 insurrection.

Of course, this is the same person who was removed from all Congressional committee assignments due to her wild, conspiracy theory statements.

Marjorie Taylor Greene says she can’t recall if she made statements she’s quoted in CNN as saying, claims CNN lies about her all the time.

Attorney then plays video of her saying those comments.

“Now that we’ve watched the video, I remember that.”

Under questioning, Marjorie Taylor Greene has to be shown the language of the oath she took, because she can’t recall if she said she took on the obligations of office freely & without any purpose of evasion. This is the standard oath fed’l employees take.

“All of us together, when we rise up we can end all of this. We can end it. We can do it peacefully, we can. I hope we don’t have to do it the other way. I hope not, but we should feel like we will if we have to…” pic.twitter.com/0KNLDxtdaT