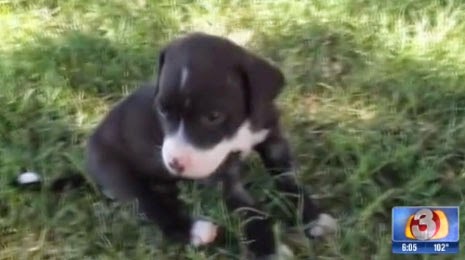 Via AZfamily.com:An Arizona man has been arrested for animal cruelty after allegedly throwing a puppy from a vehicle which, according to witnesses, was moving at 50 miles an hour.

The Yavapai County Sheriff’s Office (YCSO) arrested 27-year-old Joseph Kennedy, a resident of Cornville. He faces two felony counts of Cruelty to Animals, along with a charge of Possession of Dangerous Drugs and Paraphernalia.

The puppy was taken to a local emergency vet clinic. Vets say the dog suffered significant brain damage as a result of the incident.

MaryAnn Canning took the dog home and named it Hope. She got the call that YCSO made the arrest Monday night. “I was really happy, really really happy. Really relieved that Hope is going to get some justice,” she said.

After being detained by officers, Kennedy apparently resisted arrest.

According to reports, Kennedy had a fight with his girlfriend on the day of the incident, and while riding in a friend’s car threw the puppy out the window because “he didn’t care for the animal.” Kennedy’s 8-month old baby was also in the car at the time.

Imagine if the man had been in an even worse mood…?

I say throw him from a car moving at 50 miles an hour.

Although blind in one eye and dear, Hope is doing well in a foster home, according to sources. 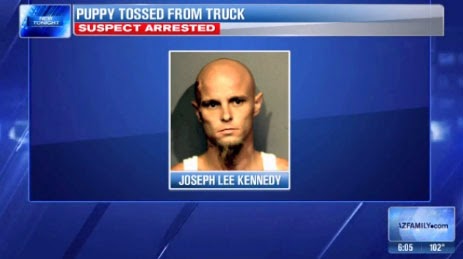