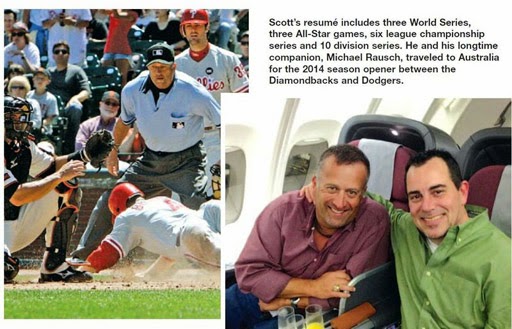 Outsports shares one of the best, yet surprisingly casual coming out stories ever.

Major League Baseball umpire Dale Scott – veteran of three World Series, three All-Star games and six league championship series – allowed himself to be profiled in a Referee Magazine interview this past October. And while he’s always been out in his private life, he’s never made an issue of being gay at work. However, when the profile was being written about him he thought it would off-key to not include his husband Mike, with whom he’s been with for 28 years, in some small way.

“My thought process was,” Scott told Outsports in his first interview on the subject, “is that there’s a story about my career and how I got started in umpiring and they’re talking to people I have known since junior high and it didn’t seem right to have a whole story and pictures without a picture of Mike and I, someone who’s been with me through this entire process. We met the October after my first year in the big leagues.

“Obviously, when I sent that picture to Jeff, I knew exactly what it meant. In a small way, this was opening that door in a publication that wasn’t going to be circulated nationwide. It could be picked up, but it’s not Time magazine. I made that decision to go ahead and do it because I felt it was the right thing to do.

Regarding his work with MLB, Scott says, “I am extremely grateful that Major League Baseball has always judged me on my work and nothing else.”