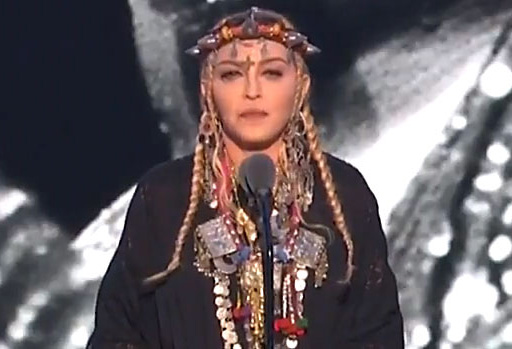 After a huge backlash on social media about Madonna’s “tribute” last night on the MTV VMAs for recently deceased ‘Queen of Soul’ Aretha Franklin, the ‘Queen of Pop’ posted a clarification today on her social media explaining what happened.

To recap: Madonna took the stage to present the Video of the Year award with a huge photo of Franklin behind her.

But before the award, she launched into a long, seemingly disconnected remembrance about her early days and an audition where she sang an a cappella rendition of Franklin’s “Natural Woman” to get a gig as a backup for a French recording artist.

Turns out she got the gig, but returned home unfulfilled by the experience.

Madge appeared to bring the story to a close saying, “”You are probably all wondering why I am telling you this story. There is a connection, because none of this would have happened—could have happened—without our Lady of Soul. She led me to where I am today. And I know she influenced so many people in this house tonight. In this room tonight. And I want to thank you, Aretha, for empowering all of us. R-E-S-P-E-C-T.”

But then there was one more anecdote to add about losing a shoe at the 1984 VMAs. Still not sure about that one.

In any case, today Madonna posted a photo of herself along with Video of the Year winner, Camila Cabello (for “Havana”). She also shared that her speech about Aretha was not meant to be a “tribute.”

“They asked me to share any anecdotes I had in my career connected to Aretha Franklin,” wrote Madonna. “I shared a part of my journey and thanked Aretha for inspiring me along the way.”

Madge added, though, “ I did not intend to do a tribute to her!”

“That would be impossible in 2 minutes with all the noise and tinsel of an award show,” she continued. “I could never do her justice in this context or environment.”

The newly-minted 60-year-old went on to say she loves Aretha, she loves Camilla, and she loves the dress she wore last night.

Im with the Winner!! The beautiful @camila_cabello ! So proud of her! 🌈💕🎉. And just to clarify: I was asked to present video of the year by MTV! And then they asked me to share any anecdotes I had in my career connected to Aretha Franklin! I shared a part of my journey and thanked Aretha for inspiring me along the way. I did not intend to do a tribute to her! That would be impossible in 2 minutes with all the noise and tinsel of an award show. I could never do her justice in this context or environment. Unfortunately most people have short attention spans, and are so quick to judge. I love Aretha! R.E.S.P.E.C.T. 🙏🏼. I Love Camilla! Congrats! I LOVE my dress! AND. I love-L O V E!! ♥️ and there is nothing anyone can say or do that will change that. #vmas #postivevibes
A post shared by Madonna (@madonna) on Aug 21, 2018 at 9:23am PDT