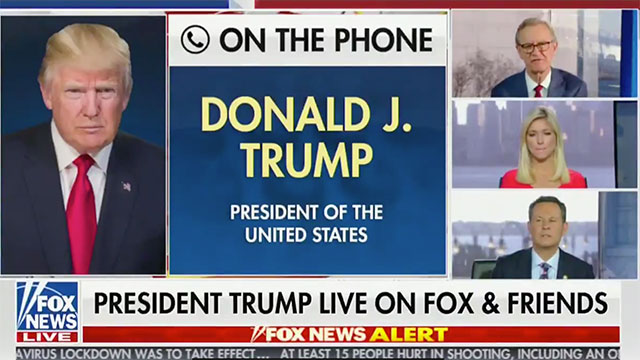 It’s finally Election Day! And according to ABC News, early voting across the country hit record highs as over 97 million Americans cast their vote before today.

Prior to this morning, voters had cast more than 70% of the total ballots counted in the 2016 general election, when 166 million Americans voted. In 2016, there were just under 43 million early votes.

Former Vice President Joe Biden attended a church service before heading out to final ‘get out the vote’ appearances in Pennsylvania.

Good morning America! It’s Election Day & @JoeBiden is starting his by going to church with @DrBiden and two of their granddaughters. He’ll then make one final stop in Scranton and Philadelphia, Penn. as voters head to the polls today. pic.twitter.com/gBLDwPvXsG

Donald Trump called in to his own place of worship – Fox & Friends.

Sounding a bit low energy, Trump spoke about how “mean” people had been to him, bragged about the size of his campaign rallies, threw some predictable shade at Biden, and then turned on – of all outlets – Fox News Channel.

“Fox has changed a lot,” whine Trump. “Somebody said ‘What’s the biggest difference between this and four years ago?’ I said Fox, it’s much different, you know. Fox is a much different place in terms of politics.”

“In the old days, [Fox] wouldn’t put on sleepy Joe Biden every time he had opened his mouth. They had other networks for that, frankly. It’s a much different operation, I’m just telling you. It’s much different.”

Trump also complained about the democratic process itself again moaning that all ballots won’t be counted by the end of tonight.

As I’ve reported yesterday, every state has its own rules for cutting off accepting ballots and when to begin processing and counting them.

Some of those ballots include military service members overseas who have little control over when their ballots arrive.

Trump is on fox complaining about fox

An exhausted-sounding Trump on when he’ll declare victory: “When there’s victory. If there’s victory … there’s no reason to play games.” pic.twitter.com/MiuuPjTe1E

“There’s no reason why they couldn’t put the ballot in 2 weeks earlier” — Trump explicitly wants to disenfranchise voters who have done nothing wrong beyond cast a ballot in a way he doesn’t like pic.twitter.com/zzLZnekNaR

Just heard him speaking at his campaign HQ in Virginia and it sounded like a concession speech. He kept talking about his presidency in the past tense, like it was over. Their internals must look bad