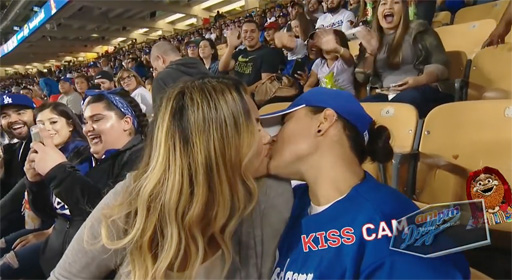 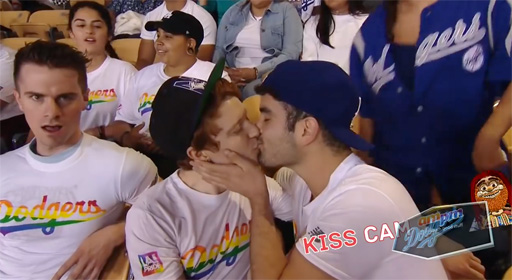 Over 8,000 fans attending the LA Dodgers Pride Night game last Friday – the most tickets ever sold by a Major League Baseball team for a single Pride Night.

The Dodgers have put much thought into making sure all LGBT Dodger fans feel embraced throughout the night, including:

• The National Anthem was performed by Dot Marie Jones (of GLEE fame) along with the Gay Men’s Chorus and Trans Chorus of Los Angeles.

• There were Pride Night t-shirts created by the Dodgers for the event.

• Pride Night was announced during the game announcements, and signage all over the stadium made clear whose night it was.

Bonus: the home team won with the Dodgers besting the Cincinnati Reds 7-2.

By the way, the Reds don’t have any LGBT fan events like Pride Night, so boo on them. They lost twice that night.

Watch the Kiss Cam action below: