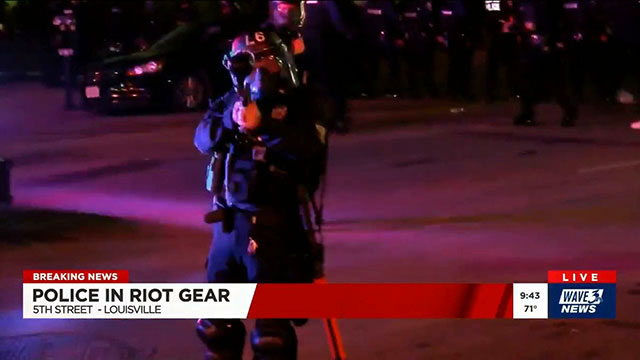 It was previously reported that the officer was firing rubber bullets, but Jessie Halladay with the Louisville Metro Police Department said LMPD officers do not use rubber bullets, and it was likely that was Rust and Dobson were hit with pepper balls.

In response to what happened to Rust and Dobson, WAVE 3 News General Manager Ken Selvaggi issued a statement saying, “We strongly condemn the actions of the LMPD officer who tonight repeatedly fired at and hit our reporter and cameraman, both of whom were courageously and lawfully covering breaking news in their community. There is simply no justification for the Louisville police to wantonly open fire, even with pepper balls, on any journalists under any circumstances.”

During night two of several hundred protesters gathering downtown, crowds appear to be larger and police are continuing their efforts to clear the area.

Watch the brief video clip of the encounter below. One commenter on the YouTube page wrote, “It’s almost like they [police] are trying to start a war with civilians.”