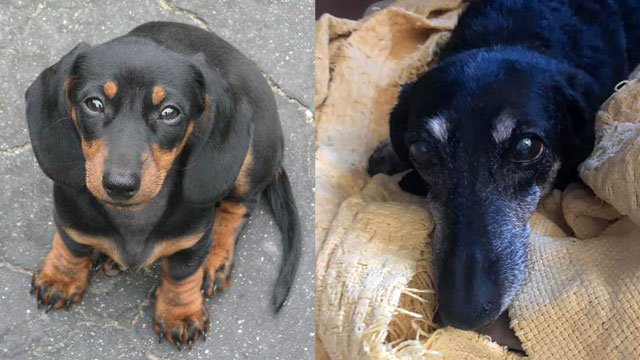 Michael and I helped our prettiest, Tyler, cross the rainbow bridge Friday evening.

She was diagnosed with Cushings Disease last week and we started medications, but they overwhelmed her causing her to throw up for about four days.

We stopped them, with vet’s advice, hoping they’d work out of her system and she would bounce back.

But by Friday, she hadn’t taken any water or food for three days. No treats, nothing.

At sixteen and a half, she was very weak, and we had to be ‘the adults.’

Sad doesn’t begin to describe where we are emotionally. Numb is about all I can come up with.

When Michael and I met, he had Olivia the chihuahua, named after iconic pop goddess, Olivia Newton-John.

About a year and a half after I moved from New York City to Los Angeles to be with Michael, he gifted me Sabrina at Christmas 1997.

In 2002, my friend David and I walked into a pet store on the Upper East Side of NYC, and I met Bruno the wonder dog for the first time.

‘It only takes a moment, for your eyes to meet and then…’

While I played with him, David went to the front of the store and paid for ‘the Brun,’ who would become my best friend.

In spring 2003, the night before Bruno was going to be fixed, he clearly sensed ‘a disturbance in the force.’ We heard yelping and ran to the kitchen where he and Sabrina looked like guilty teenagers.

I was on tour with Chicago the Musical (for a change). Michael and I agreed we’d give two puppies to friends and keep one. But when I returned home, there were still six dogs at Casa Caprio.

So, life went on – with six small dogs and two adults making up our unexpectedly large family. And it just worked.

Bandit (who knew he was a supermodel) crossed over in February 2017 after a six-month cancer journey.

The Brun, my bestie, left us a year later in February 2018, after a long bout with Cushing’s disease.

And now, Tyler joins her dad, mom, brother and Olivia.

Bear, who entered the world last on July 19, 2003, is still with us. He licked Tyler’s face after she passed and has spent the day on the pillow where Tyler always slept.

Circle of life. This is what happens. We certainly get more from them than we could ever give back.

It’s definitely been a rough day.

Tyler’s passing has triggered a trip down memory lane, and I’m struck by how quickly a generation has passed as this family graced us with their lives.

It feels like this amazing doggy adventure has gone by in the blink of an eye.

As I walked through the living room today I was keenly aware that I wasn’t being followed by a herd of dachshunds.

Thank god for the advent of phone cameras and video. They all continue to live so vibrantly, not just in my memory, but on my computer screen in bold, bright living color.

I step back and say thank you for the blessing, joy, laughter, and love from these spirited, furry family members.

We are sad but immensely grateful.

Tyler, “the prettiest,” leaves her paw print on our hearts forever.