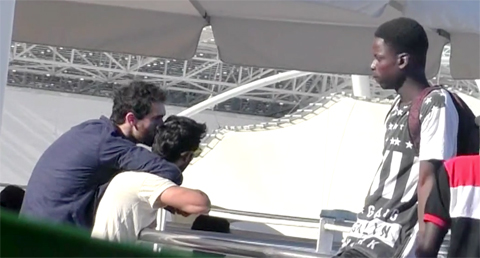 In the videos, the different couples were verbally and physically threatened.

So Lorenzo and Pedro decided to see how their capitol city of Lisbon, Portugal, would react.

And the results were very, very positive! After a few days of shooting throughout the city holding hands, they even bumped it up a bit and shared a few quick PDAs.

While there were what the couple felt were “curious” looks (which Lorenzo admits could have been due to the fact he’s 6’5″ and Pedro is 5’7″), there was no violence, so ugly stares, no verbal abuse at all.

I love how they sum up the experience: “Always walk in public with pride.”

I spent about two months in Lisbon as an actor some years ago while touring with CHICAGO The Musical, and I can attest to how friendly and warm the city can be.

Bravo to Lorenzo and Pedro for proving the world CAN be civilized.