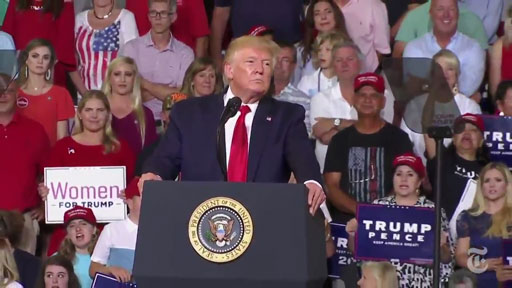 At last night’s campaign rally, Donald Trump whipped up the crowd to such a frenzy, they began chanting “Send her back,” referring to Rep. Ilhan Omar.

Trump claims he “disagreed it,” and tried to stop the chant saying he began speaking “very quickly.”

But if you watch the video, 13 long seconds of chanting goes by before he continues speaking. And when he does, it isn’t to admonish the racist chant.

We do have video recordings, you know…

President Trump said he tried to stop his supporters’ chants of “send her back” after he railed against the congresswoman Ilhan Omar. But video from last night’s rally contradicts him. Read more: https://t.co/sBEQr2Sa5O pic.twitter.com/pDGpfd75P5

Rep. Omar responded to the news of the chant by tweeting a quote from author Maya Angelou:

👋🏽 I am where I belong, at the people’s house and you’re just gonna have to deal! pic.twitter.com/W0OvDXGxQX

I asked the President why he didn't stop the "send her back" chants from his supporters last night.

"I think i did," he answered. "I started speaking quickly. I disagree with it by the way."

Fact: the chant went on for 13 seconds before he started speaking again.— Jonathan Karl (@jonkarl) July 18, 2019

A chant like “Send her back!” is ugly and dangerous, and it is the inevitable consequence of President Trump’s demagoguery. This is how history’s worst episodes begin. We must not allow this man to take us to such a place.

HERE IS WHAT HAPPENED:

– Crowd starts chanting, “Send her back!”

– Trump lies, says he tried to stop the chant pic.twitter.com/MlMDyjvtOM