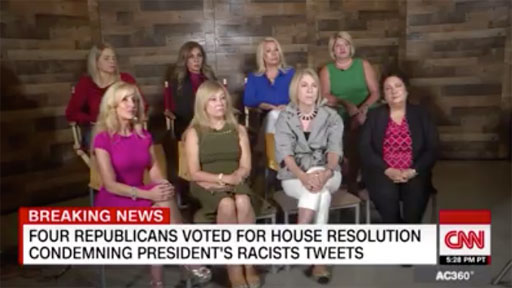 CNN interviewed a group of women presented as ‘Republican’ voters who happen to support Donald Trump, when they are actually part of an organized group that promotes the Donald.

The seemingly random group of eight women were, in fact, members of an organized group dedicated to promoting Trump. The group calls itself the Trumpettes of America 2019 Palm Beach Team, although CNN and correspondent Randi Kaye didn’t mention anything about such a group. Nor did the anchors, including Anderson Cooper, who introduced Kaye’s report.

The network simply identified the panelists individually, with their names appearing onscreen next to the word “Republican.” Kaye gave no hint that the women knew one another and had a common cause.

As a result, the segment left the impression that CNN had assembled a panel reflecting a cross-section of opinion from Republican women about the crossfire between Trump and four freshman Democratic congresswomen of color, whom Trump told to “go back” to their own countries in Sunday tweets, despite all four being American citizens.

Rather than a cross-section, however, the Trumpettes were plainly of one mind.

Some of the women had appeared on CNN before, and neither time was an affiliation to being part of an organized Trump group acknowledged.

Edward Wasserman, dean of the University of California at Berkeley journalism school, described the lack of disclosure as “a fraud on the viewer.”

Wasserman told the Post the network may have withheld the identity of the group “to cover up the lack of news value in the interview and to provide ‘something that looks like balance’ in the face of Trump’s criticism that CNN is anti-Trump.”

The women do seem pleased with how the segment went, even going so far as to promote the clip on their Facebook page.

However, note that they encouraged their followers to watch them on “the Anti-Trump Fake News CNN Show.”

There’s gratitude for you… 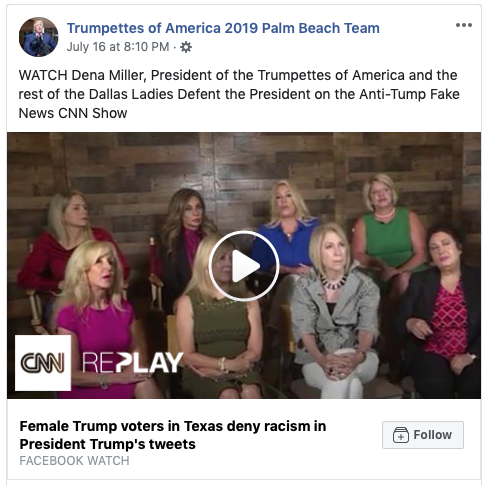