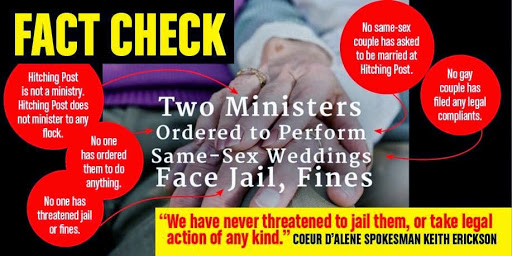 The extreme right-wing, anti-gay folks like Bryan Fischer are promoting Idaho’s The Hitching Post as a “victim” of pro-gay policies with the arrival of same-sex marriage to the state.

Coeur D’Alene is one of the few cities in Idaho which include sexual orientation in it’s nondiscrimination laws regarding public accommodation. In other words, if you are a public business, you can’t refuse service to gays and lesbians based on their sexual orientation.

Churches and religious organizations operating as 501(C)3s are exempt from the law. The Hitching Post is not one of those organizations.

The story the haters would like you to buy is that the wedding venue has been “threatened” with jail time and fines for refusing to perform same-sex marriages.

• No one has asked the venue to perform a same-sex marriage
• No one has filed a complaint against the venue
• The Hitching Post is not a church; it is a FOR-PROFIT wedding business
• The “ministers” of the venue are ordained for the purpose of performing weddings; they do have “minister” to any congregation or flock
• No one has ordered anyone at the venue to do anything

But if you listen to the Bryan Fischers and Tony Perkins of the world, the two “ministers” of The Hitching Post are about to be drawn and quartered. Take a look at this recent tweet from Bryan Fischer:

Coeur D’Alene City Spokesman Keith Erickson has publicly stated, “We have never threatened to jail them, or take legal action of any kind.”