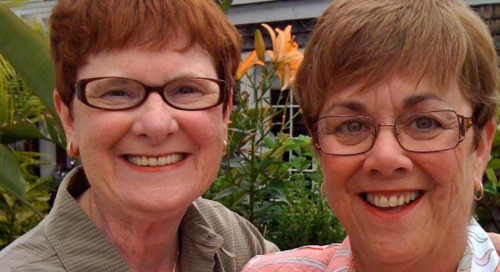 A senior lesbian married couple in Missouri have been turned away by a senior housing community because of the couple’s sexual orientation.

The St. Louis Post-Dispatch is reporting on a new law suit filed by Bev Nance, 68, and Mary Walsh, 72, who have been denied housing by the Friendship Village senior living community because they are married to each other.

The couple, who have been together for almost four decades and legally married since 2009, had toured the Sunset Hills location several times and even put down a $2,000 deposit.

According to the lawsuit, the couple were denied housing because their same-sex relationship violated Friendship Village’s cohabitation policy that views marriage as “the union of one man and one woman, as marriage is understood in the Bible.”

The Post Dispatch received a statement from Friendship Village which read: “We have just been made aware of a lawsuit that we have not yet seen and have not had an opportunity to review. This matter will be discussed with legal counsel and (we) have no further comment at this time.”

Nance and Walsh are being represented by the National Center for Lesbian Rights, the ACLU and Washington-based law firm of Relman, Dane & Colfax.

The couple’s legal team says the policy violates the Fair Housing Act in terms of sex discrimination. Since the women are married to females, not men, the decision to deny them occupancy is, in essence, discrimination based on their sex.

“Mary and Bev were denied housing for one reason and one reason only — because they were married to each other rather than to men. This is exactly the type of sex discrimination the Fair Housing Act prohibits,” said Julie Wilensky, an attorney for the NCLR, said in a statement to the press. “Their story demonstrates the kind of exclusion and discrimination still facing same-sex couples of all ages.”

The couple attempted to move into Friendship Village in 2016. After multiple visits and several conversations with the staff they put down a $2,000 deposit in order to get on a waiting list. It was only after that they were informed of the “longstanding” policy on cohabitation.

The Friendship Village website says it is a nonprofit that provides “a fulfilling, worry-free lifestyle” to more than 1,000 seniors in Chesterfield and Sunset Hills. Its mission statement says, “Guided by Biblical values, continually serve the senior community with quality offerings that promote lifelong well-being.”

Walsh and Nance considered other housing but said Friendship Village was the only place in the St. Louis area “that can provide increased levels of care without an increased monthly cost to residents.”

According to the lawsuit, a letter to Walsh dated July 29, 2016, from Michael Heselbarth, a top administrator with the retirement village, said: “ Your request to share a single unit does not fall within the categories permitted by the long-standing policy of Friendship Village Sunset Hills.”

Legal experts are divided on the possibility of winning the lawsuit.

Anders Walker, a constitutional law professor at St. Louis University, told the Post-Dispatch, “My gut instinct is they’re probably out of luck.”

“When a private body doesn’t want to rent a room to you, for them, that’s freedom of association,” he added. “They’re probably entitled to their deposit back.”

But Marcia McCormick, an employment and labor law expert, says Friendship Village’s religious freedom claim “does have to be sincere. The defense of the First Amendment does not excuse discrimination in the Fair Housing Law.”