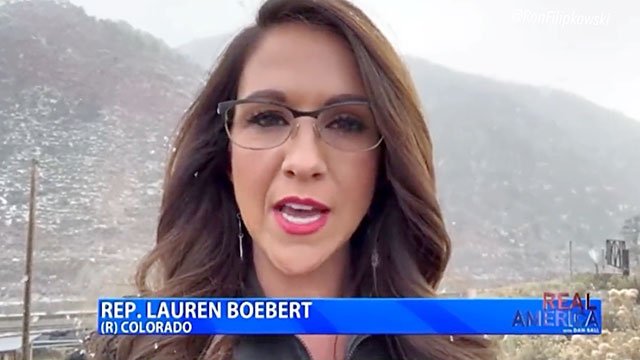 Rep. Lauren Boebert (R-CO) streamed onto OAN to complain that people called her out for her hypocrisy in tweeting “thoughts and prayers” for the victims of the horrific Club Q shooting after spending years helping to foment angry  rhetoric against the LGBTQ community.

Gurl, get off the cross – we need the wood.

Transcript from her angry screed:

“I have been accused of just about every mass shooting there has been since the Left has learned of my name.

“Whether it’s Uvalde, or the King Soopers shooting in Boulder, Colorado, or the Buffalo, New York shooting.

“Or even Paul Pelosi getting hammered. I have been blamed for all of that. I think the Left is pissed I won my election.

“And so they’re trying to find something to go after me about. I expressed my concern for the family, for the victims. And the way that they came after me is absolutely disgusting.”

Boebert says she’s also a victim of the Club Q shooting: “I’ve been accused of just about every mass shooting there has been. I’ve been blamed for all of it. It has to come to an end. The Left is pissed I won my election, so they’re trying to find something to go after me about.” pic.twitter.com/DS5HvHYjgQ

The editorial board of the Denver Post clapped back at Boebert in an op-ed which read in part:

Thoughts and prayers do not end gun violence. Words matter. Hateful, intolerant speech has no place in public discourse.

Let’s take Rep. Lauren Boebert, who tweeted this out on Sunday in the wake of the Club Q shooting: “The news out of Colorado Springs is absolutely awful. This morning the victims & their families are in my prayers. This lawless violence needs to end and end quickly.”

This is the same person who has previously offered up these gems: “Take your children to CHURCH, not drag bars” and “We went from Reading Rainbow to Randy Rainbow in a few decades, but don’t dare say the Left is grooming our kids!”

Boebert was rightly excoriated for her role in elevating hateful speech against the LGBTQ community. As an added bonus, her hard-line positions on gun control, ruling out even common sense measures, mean she would not have supported any efforts that might have kept guns out of this shooter’s possession.

Boebert’s profile made her an easy target for those pointing out the dangerous environment created when we fail to treat our lesbian, gay, bisexual, transgender and queer neighbors as equals. But she is not the only one in this state, let alone the nation, guilty of perpetuating the rhetoric that fuels fear and hate.

My god, she’s such an insufferable asshole.

People are dead and injured. Families are devastated and will never be the same again, and Boebert makes this about herself. What an awful, self-involved, heartless, callous person.

“…I’ve been blamed for it all.” I wonder why?👇 pic.twitter.com/IgAstOhFkp