The third Monday night of each month is about to become a hot bed of entertainment, music and comedy for a cause when ROCK OF AGES star Mark Shunock launches “Mondays Dark” beginning Monday, November 18th.

The framework of the evening will be modeled after a talk show format with topics, musical guests and very “off the cuff” moments.  Think a cross between The Ed Sullivan Show and David Letterman.

Shunock will gather an eclectic cast of guests including stars from Hollywood, the Strip, musical acts, athletes and celebrity chefs for 90 minutes of chat, entertainment – and a lot of laughs. “Mondays Dark” will partner with a different Las Vegas-based charity to raise $10,000 per month for each charity, with an estimated grand total of more $100,000 over the next twelve months between ticket sales and silent auction items.

The first “Mondays Dark” will benefit Opportunity Village and include special guest stars: three time Emmy nominee Dot-Marie Jones from the hit series Glee, Travis Cloer of Jersey Boys and performances by the cast of Rock of Ages, Anne Martinez and, the Opportunity Village Elvis impersonators, The OV Elvi.

Tickets range from $20- $50 and can be purchased by visiting www.MondaysDark.com and are limited to 200 tickets per event. VIP table reservations and bottle service are available for up to six people per booth by calling 702-485-1262.

Listen below as Shunock chats on what to expect at “Mondays Dark:” 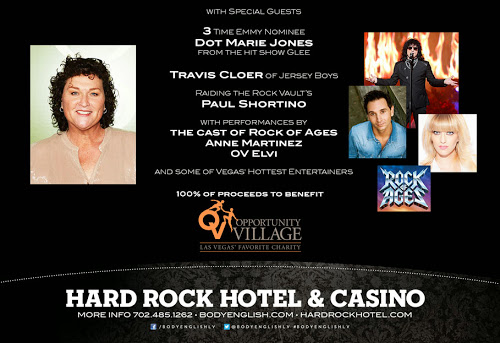