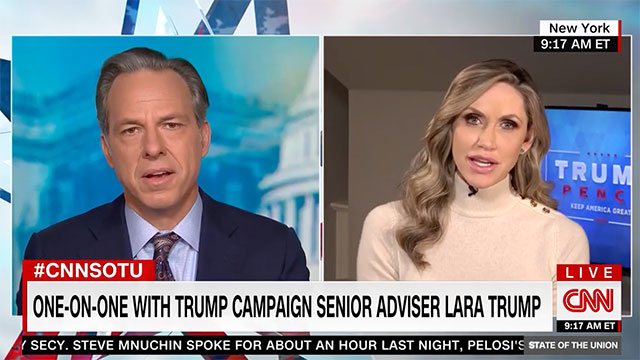 During an interview on CNN on Sunday morning, Donald Trump’s daughter-in-law Lara Trump denied ever mocking former Vice President Joe Biden who has struggled with a stutter his whole life.

Ms. Trump tried to say that she “had absolutely no idea” that Biden had ever struggled with a stutter, but then declared that Biden’s speech patterns were indicative of cognitive decline.

CNN’s Jake Tapper quickly pointed out that lots of folks have diagnosed her father-in-law from a distance as having his own decline and noted she has no background to do the same to Biden.

Tapper finally gave up on the segment as Eric Trump’s wife continued to toss a word salad trying to defend her attacks on Biden.

Let us all be grateful for Claudia Conway who sidelined her evil genius mom and forced the Trump campaign to rely on Lara Trump's off-brand Velveeta version of Trumpism.

Lara Trump's defense of Trump repeatedly ginning up "lock her up!" chants direct toward Gretchen Whitmer is pure whataboutism: "Well gosh, I'd like to show people my social media & the threats against me, the threats against my children… [Trump] was having fun at a Trump rally" pic.twitter.com/YZIhIUt5cA