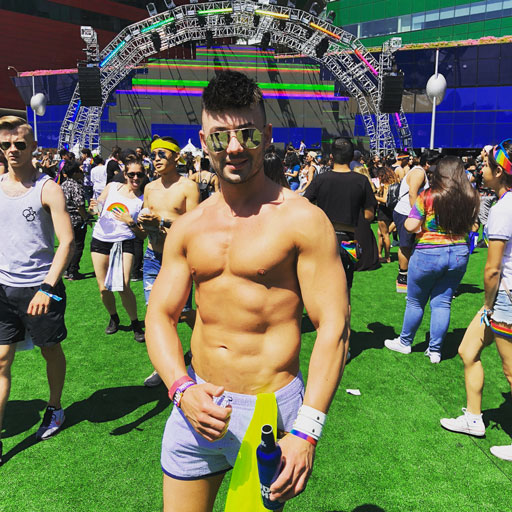 Hundreds were turned away from West Hollywood’s Pride Festival on Saturday night, including many people who’d purchased tickets.

Over 100,000 have people turned out for the LA Pride Festival, meant to run before and after Sunday’s Pride Parade.

Although Saturday’s festival was meant to run from 12 PM to 1 AM the event hit capacity attendance by 10 PM. As a result, the fire marshal and West Hollywood Police stopped all entry to the festival.

According to some attendees, the police reaction might have gotten a little over the top with cops in reported riot gear.

“What were they expecting, Stonewall?” said Jerwyn Morton who flew in from New York City to attend LA Pride. “I have never seen so many cops in my life wearing riot gear at a gay event.”

From the LA Blade:

In the past several years, the event has faced an increasingly more complex geometry as the West Hollywood Park where it is held has been unavailable for the event. At the same time, organizers have added more and more high-end music programming and stages while reducing more carnival like attractions and vendors.

“The Festival has become a full on Rave. I went this evening because I wanted to simply stroll around the festival, but the line of early 20 something people was 20 people deep for several blocks, said Christopher Johnson, 44, of Long Beach. “I’m glad it’s successful but I’m not welcome. There’s nothing there for me anymore and it makes me feel old.”

NBC Los Angeles reported disturbances at the will call window and in the street, and an LA County Sheriff’s Department officer was assaulted.

Journalist Garrick Kennedy tweeted that the driving force behind the surge in ticket sales was headliner Kehlani’s fans.

“@lapride sound system what the fuck. This is unacceptable” — @kehlani from the stage talking facts. Her headlining set is phenomenal however the sound at Pride, per usual, is not on par. It’s frustrating to watch a killer set come through muffled.

This on top of @lapride reaching capacity hours ago and having to turn away ticketed guests is giving a rough start to the festival’s finest lineup.

This year’s @lapride tripled the sales of last year. 30,000 guests. This space has never felt big enough for three stages. Organizers must consider a relocation as this year’s festival is TIGHT to move around.

Shout out to @Kehlani fans. Sources tell me she’s a driving force behind this year’s ticket sales which led to a record breaking attendance for Saturday @lapride 🌈🌈🌈🌈🌈🌈

LA Pride promoters announced that anyone who purchased entry to Saturday’s festival event will be able to use it on Sunday:

The LA Pride promoters did at least post video of Kehlani’s performance: