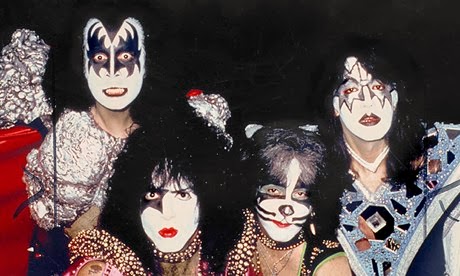 This is a tough one.

While I’m not a huge fan of KISS’ music, I’ve always respected the longevity of the band and their connection to their fans.

Apparently, there is a split with the current members of the band with original members Frehley and Peter Criss.  Should the current line up play at the RR Hall of Fame induction?  Or the current lineup of Stanley, Simmons, Eric Singer and Tommy Thayer would play instead?

The original band members have not played together for 13 years.

The band issued a statement saying they won’t play at all:

“Our intention was to celebrate the entire history of Kiss and give
credit to all members, including longtime present members Tommy Thayer
and Eric Singer, and additionally Bruce Kulick and Eric Carr all who
have made this band what it is, regardless of the Rock and Roll Hall Of
Fame’s point of view,” the band wrote on its web site. “Although Kiss
has moved forward far longer without them, Ace and Peter are at the very
foundation of what we have built and this would all be impossible had
they not been a part of it in the beginning.”

What do you think?  Should it be the original members?  Current?  Did the band pick the right solution for the fans?
Curious what other folks think…