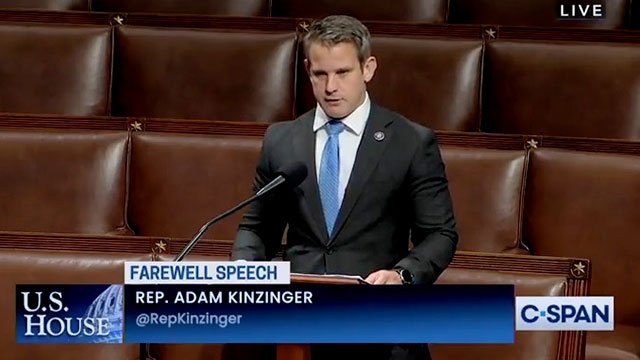 “The once-great party of Lincoln, Roosevelt and Reagan has turned its back on the ideals of liberty and self-governance. Instead, it has embraced lies and deceit.

“The Republican party used to believe in a big tent. which welcomed the tired, the poor, the huddled masses yearning to breathe free. Now, we shelter the ignorant, the racist, who only stoke anger and hatred.”

Rep. Adam Kinzinger (R-IL) during his farewell address: “Had I known that standing up for truth would cost me my job, friendships, and even my personal security, I would, without hesitation, do it all over again.” pic.twitter.com/1uXXc2QrCd

As most informed folks know, Kinzinger and Rep. Liz Cheney (R-WY) were the only two Republicans willing to serve on the committee investigating the violent January 6 invasion of the U.S. Capitol building.

From the Chicago SunTimes:

In October 2021, Kinzinger decided not to run again after Springfield Democrats, drawing new maps based on the 2020 census, threw him in a district with another Republican incumbent.

The political reality was that Kinzinger — one of 10 Republicans to vote to impeach Trump after the Jan. 6 attack — and his membership on the investigative committee — would have found it difficult to impossible to win a GOP primary.

In the last year, Kinzinger’s profile has only grown, through his work on the Jan. 6 committee and the fact that even with all that is known about Trump now — in large part due to the Jan. 6 panel’s probe — Kinzinger is still one of the few elected Republicans willing to speak out.