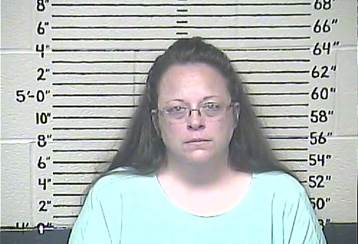 Attorneys from the American Civil Liberties Union had requested in their motion for contempt of court that the clerk should be fined, not jailed. The attorneys asked the court to “impose financial penalties sufficiently serious and increasingly onerous” to make her comply with the high court’s order.

U.S. District Judge David Bunning felt differently, and saying Davis’ supporters would pay her fines. And so, U.S. Marshals took her into custody.

According to reports, she can be released if she will allow her deputy clerks to issue marriage licenses.

The clerk, an Apostolic Christian who says she has a sincere religious objection to same-sex marriage, has refused to issue any marriage licenses since the Supreme Court decision in June legalizing same-sex marriage.

Bunning ordered Davis to resume the issuing of marriage licenses on August 12. Monday night, the Supreme Court denied an emergency application from Davis, who asked that Bunning’s order be put on hold pending appeal.

In court papers, attorneys for Davis argued that she is unable to comply with the court orders because issuing same-sex marriage licenses “irreparably and irreversibly violates her conscience.”

The ACLU attorneys, who represent two same-sex couples and two opposite-sex couples who want to get married in Rowan County, argued that Davis has no legal basis to avoid performing her duties as a government clerk.

And a federal prosecutor said it’s time for Davis and her county to comply.

“Government officials are free to disagree with the law, but not disobey it,” U.S. Attorney Kerry B. Harvey said in a statement. “The County Clerk has presented her position through the federal court system, all of the way to the U.S. Supreme Court. It is time for the Clerk and the County to follow the law.”