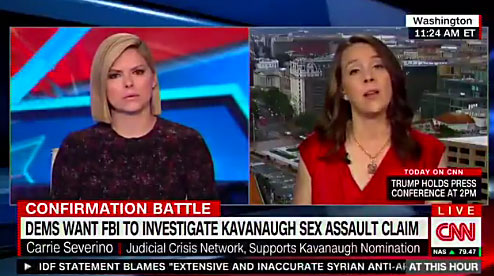 Republicans need to all get in one room and come up with a singular defense for their Supreme Court nominee, Judge Brett Kavanaugh, when trying to tamp down the recent allegations that he sexually assaulted a teenage girl back in his high school days.

Kavanaugh has already issued statements like “I have never done anything like what the accuser describes” and telling an aide to Sen. Orrin Hatch that he wasn’t even “at the party in question.”

Then today, Carrie Severino, spokesperson of the Judicial Crisis Network, defended the judge on CNN.

JCN is the campaign group for Republican judicial nominations that handles promoting nominees to the public.

In a new take, Severino tried to make the case that what Kavanaugh’s accuser describes could have been a simple case of “rough horse play” as opposed to attempted rape.

Kavanaugh spokesperson/activist says it’s not clear that the incident was attempted rape as opposed to just “rough horseplay”. pic.twitter.com/cANvVNjFKX

Now, if Kavanaugh has “never done anything like” what Dr. Christine Blasey Ford has alleged, how could it be described as “rough horseplay?”

Or – how could the teenage Kavanaugh have engaged in “rough horseplay” if he wasn’t at the party in question?

COMING SOON:
—Waterboarding = “goofing around”
—Being thrown down a flight of stairs = “shenanigans”
—Murder = “just breaking your balls a little” https://t.co/3lq0wz0jx7

I’m a regular guy: I put my pants on one leg at a time and I turn up my music real loud during horseplay to drown out the screams. https://t.co/9BKA2cqhLR

And now the “horseplay” defense. With friends like these … https://t.co/D77VZaef7v

rough horseplay at the party he wasn’t at https://t.co/rYBB62wZu1