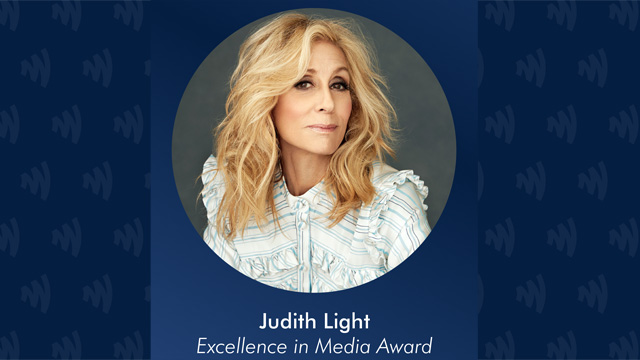 Award-winning actress, producer, and activist Judith Light will be honored at the New York City GLAAD Media Awards with the Excellence in Media Award.

GLAAD also announced that Lilly Singh, openly bisexual executive producer and host of NBC’s “A Little Late with Lilly Singh,” will serve as host of the Awards, which will take place at the Hilton Midtown in New York on Thursday, March 19.

“Judith Light stood up for and with LGBTQ people when others in media and entertainment refused to speak up, and she has never left our side,” said GLAAD President and CEO Sarah Kate Ellis. “When the GLAAD Media Awards first started and was a small event with little visibility, she was one of the few entertainers who would join us in calling for LGBTQ representation, so it is only fitting to now honor her advocacy on what has become the largest LGBTQ stage in the world.

“From standing alongside LGBTQ people during the AIDS crisis, to fighting for marriage equality, to now uplifting transgender people and issues, Judith advocates with a unique passion and an unending dedication that uplifts.”

The multiple Tony and Emmy award-winning actress is known for her extensive body of television, film, and stage work, for which she recently received a star on the Hollywood Walk of Fame. Currently, Light is starring opposite Bette Midler and Ben Platt in Ryan Murphy’s Netflix series The Politician, which is nominated for a GLAAD Media Award.

On-screen, Light has portrayed many pivotal roles that have helped to advance LGBTQ acceptance and elevate LGBTQ stories and issues.

In 1989, Light starred as Ryan White’s mother in The Ryan White Story, a film based on the true-life story of teenager Ryan White who contracted HIV and was expelled from his middle school.

Light has also appeared in several other films and shows that have helped to elevate LGBTQ issues and people, including the 2007 film Save Me about the dangers of gay conversion therapy, and Ryan Murphy’s FX series The Assassination of Gianni Versace: American Crime Story, which received a GLAAD Media Award and garnered her an Emmy and Critics Choice nomination.

Light is also known for her variety of award-winning roles in the theater and won two consecutive Tony Awards. Light was honored with the 2019 Isabelle Stevenson Tony Award for her extensive philanthropy work, especially in fighting to end AIDS and championing LGBTQ and human rights.

Throughout her career, Judith Light has been a fearless advocate for LGBTQ people and has helped to bring awareness to numerous LGBTQ issues and causes.

During the 1980s, Light was one of the few prominent celebrities who helped to bring draw attention to the AIDS epidemic and fight stigma towards LGBTQ people and people living with HIV/AIDS. During this time, Light worked with many different LGBTQ organizations to help accelerate acceptance for the LGBTQ community, including the Broadway Cares/Equity Fights AIDS, GLAAD, NAMES Project AIDS Memorial Quilt, Project Angel Food, and Elton John AIDS Foundation.

Throughout the 1990s, Light continued to advocate for LGBTQ issues by participating in various events and campaigns, including the LGBT March in Washington in 1993, the California AIDS Ride in 1995, and the display of the NAMES Project AIDS Memorial Quilt with Elizabeth Taylor in 1996.

In 2002, Light also traveled to South Africa for the AIDS walk to raise awareness about HIV/AIDS in the country and help drive greater research initiatives in the United States. Light has also served on the boards of the Matthew Shepard Foundation and the Point Foundation.