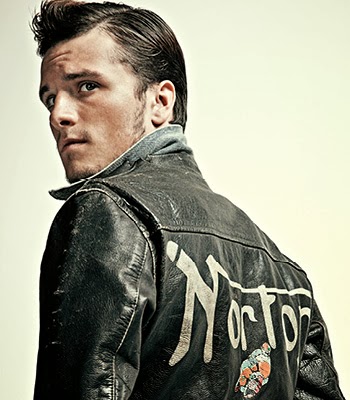 OUT has a disarmingly honest and self-assured  interview with LGBT ally and movie star Josh Hutcherson.

Just a bit of what Josh shares over a lunch with OUT:

We’ve barely started lunch, and I’m nowhere near my usual open-ended sexuality question, when Josh Hutcherson offers this: “I would probably list myself as mostly straight.”

That “mostly” is what makes Hutcherson winningly uninhibited, but also typical of his generation. New research published in The New York Times in 2010 shows that an increasing number of guys his age identify as “mostly straight,” and Hutcherson’s ease in embracing ambiguity over neat and secure boxes speaks to his self-assurance.

“Maybe I could say right now I’m 100% straight,” he says. “But who knows? In a fucking year, I could meet a guy and be like, Whoa, I’m attracted to this person.”

Hutcherson seems delighted by the complicated nature of human sexuality, but he doesn’t take sex too seriously—“Sometimes the rhythm isn’t right or you’re trying to make a new position work and it really doesn’t, and you have to laugh”—and isn’t allergic to oversharing. Of nude photos it’s rumored he posted to a dating site, he shrugs off any comment except to say, “I find it so shocking still that nakedness is so shocking.”

He definitely doesn’t understand judgmental attitudes toward gay people, which is why he cofounded Straight But Not Narrow, a youth organization that focuses on arming allied kids with the confidence and tools they need to speak out against homophobia. “Sometimes it’s frustrating to comprehend how people are not OK with it. If you can try to tell me how it’s hurting you, you’re crazy. You’re absolutely crazy. Like, what do you mean it’s not natural? Even if—even if, which, I disagree, but even if—why the fuck do you care?”

Read more of the interview at OUT