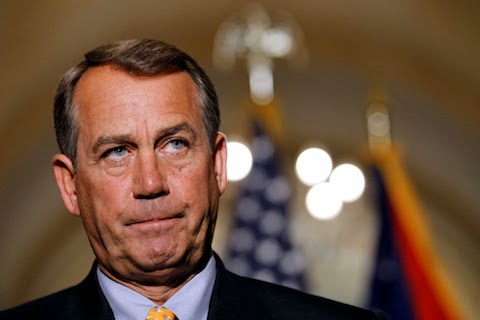 In an uneven and poorly ghostwritten Op-Ed for CNN, Speaker of the House John Boehner tries and fails to explain why House Republicans plan to sue President Obama for his “lawlessness” – i.e. his use of executive orders to get the work of the people done.

After calling President Obama’s use of executive orders “egregious in quantity,” Boehner forgets to mention that President George W. Bush issued 291 executive orders versus Obama’s total of 182. Hard to be excessive when the “other guy” signed a whole lot more, Mr. Boehner. As a matter of fact, most modern-day presidents have issued more executive orders than Mr. Obama.

And the House Speaker says that the President’s policies have hurt the US economy. Another difficult charge to make just a day or so after the June jobs report showed over 288,000 new jobs created last month, and unemployment falling to five year lows. This is “hurting the economy?” Imagine what Boehner thinks about the stock market which has doubled under President Obama. Oh, the horror!

Even Erick Erickson of the conservative blog RedState sees through the smoke and mirrors, and advises House Republicans to get to work instead of waste taxpayer money on a frivolous “lawsuit:”

John Boehner’s lawsuit is nothing more than political theater and a further Republican waste of taxpayer dollars. If the Republican leaders in the House are too chicken to use their constitutional powers to rein in the President, they should just call it a day and go home.