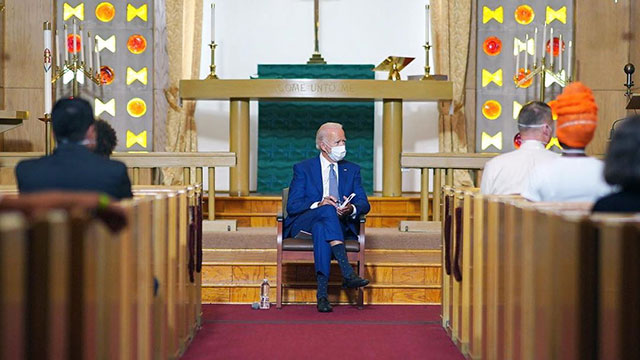 Former Vice President Joe Biden and Jill Biden met with the family of Jacob Blake during a trip to Kenosha, Wisconsin.

The city has been rocked by unrest following the shooting of Blake, a Black man, was shot in the back seven times by a police officer.

The Bidens met privately with members of the Blake family in a Milwaukee airport terminal. They spoke with Blake’s parents, three siblings and members of Blake’s legal team. Blake, a 29-year-old father of six, is now paralyzed from his injuries.

Ben Crump, Blake’s attorney, said in a statement that Blake himself joined the conversation by phone.

“The family was grateful for the meeting and was very impressed that the Bidens were so engaged and willing to really listen,” Crump said. He said that Blake’s mother led the group in prayer, and his father talked about the need for systemic police reform.

“It was very obvious that Vice President Biden cared, as he extended to Jacob Jr. a sense of humanity, treating him as a person worthy of consideration and prayer,” Crump said.

Donald Trump didn’t meet with Jacob Blake’s family in Wisconsin because they asked to have a lawyer involved which Trump called “inappropriate.”

Biden clearly didn’t have a problem with having a lawyer “involved.”

Biden later met with community leaders to talk on addressing issues of racial justice. He also denounced recent rioting and looting which has taken place while speaking with a business owner whose store was damaged during the unrest.

“Protesting is protesting, it’s a right, as my friend John Lewis would say. But that does not include looting, burning or anything else,” Biden said.

If you watch anything today, please watch the first video posted below. Just watch and listen.

While the White House was talking about a lady’s hair today, Joe Biden was meeting with the Blake family in Kenosha.

Joe Biden in Kenosha: “Regardless how angry you are, if you loot or you burn, you should be held accountable.” pic.twitter.com/pmgsNB5kv8

Reminder that Trump said a reason he didn’t meet with Blake’s family during his Kenosha trip this week was because the family wanted an attorney to be present. Here, the family attorney issues effusive praise of Biden after meeting today. https://t.co/UJr7ngFFz8