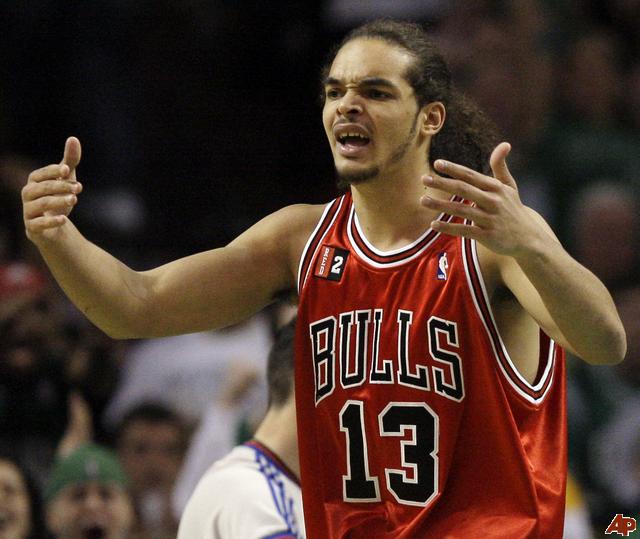 Chicago Bulls center Joakim Noah apologized again Monday for directing an anti-gay slur at a fan during Game 3 of the Eastern Conference finals, and was fined $50K by the NBA.

Noah and NBA officials met Monday morning. The league had no immediate comment, but Noah said he emerged from that talk prepared to “pay the price” for what happened when he returned to the bench with two fouls midway through the first quarter of Sunday night’s game against the Miami Heat.

“The fan said something that was disrespectful towards me,” Noah said. “And I went back at him. Got it on camera. I don’t want to hurt anybody’s feelings. Anybody who knows me knows that I’m not like that. I’m an open-minded guy. I said the wrong thing and I’m going to pay the consequences — deal with the consequences — like a man. I don’t want to be a distraction to the team right now.”

Television cameras captured Noah saying an expletive, followed by the slur. Noah said he did not realize the gravity of the situation until he was questioned by reporters after the game Sunday, adding that he meant “no disrespect” to anyone.

Last month, Kobe Bryant of the Los Angeles Lakers was fined $100,000 for directing the same slur toward a referee.

The Gay & Lesbian Alliance Against Defamation, or GLAAD, said it reached out to the NBA and the Bulls on Monday “to discuss next steps,” and called upon the league to reiterate to its players that anti-gay words should not be tolerated in the game.

“Last month the NBA sent an important message about how such slurs fuel a climate of intolerance and are unacceptable,” GLAAD President Jarrett Barrios said in a statement. “These anti-gay remarks, coming so soon after, demonstrate how much needs to be done.”

“At a time when the NBA and a growing number of pro-athletes are publicly standing up for equality, it’s too bad Mr. Noah worked against their efforts last night,” HRC President Joe Solmonese said. “That said, we’re pleased he quickly realized the error of his ways and apologized.”

Noah repeated often Monday that he was apologetic for the incident. He said he would “learn from my mistakes,” and acknowledged that being frustrated over picking up his second foul did not excuse his words.

I appreciate that he apologized.  And I understand there’s a lot of testosterone in the game.  BUT if these guys make huge amounts of money based on skills and discipline that got them to where they are – then surely they can exercise enough “discipline” to not fall in the easy trap of using anti-gay slurs.  I believe a message does need to be sent – especially so soon after Kobe Bryant was caught doing the same thing.  Kids look up to these athletes and when they see this behavior slide, they think it’s ok to do it too.