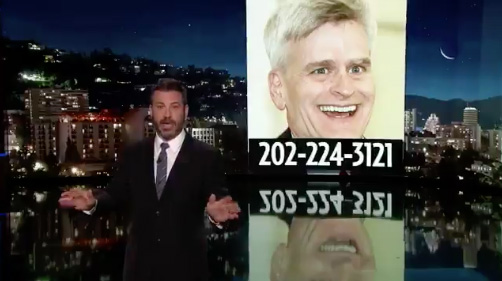 Jimmy Kimmel proved last night that he does not suffer fools (or liars) lightly as he ripped on Sen. Bill Cassidy who is attempting to pass the latest “repeal and replace” of the Affordable Care Act.

“This guy, Bill Cassidy, just lied right to my face.”

“I don’t know what happened to Bill Cassidy,” Kimmel said. “But when he was on this publicity tour, he listed his demands for a health-care bill very clearly. These were his words. He said he wants coverage for all, no discrimination based on preexisting conditions, lower premiums for middle-class families and no lifetime caps. Guess what? The new bill does none of those things.”

Earlier this year, Kimmel talked about the wrenching experience of seeing his son go through open heart surgery, and he talked of the importance of lower and middle class families having such coverage in the event of such an emergency. After seeing the monologue and using the term “Jimmy Kimmel test.” Cassidy appeared on his show.

But Kimmel said that Cassidy “just lied right to my face” when he was on the show, noting that he had said that his plan would not allow insurance companies to impose annual or lifetime caps on coverage.

On Tuesday, Kimmel said that “this new bill actually does pass the Jimmy Kimmel test, but a different Jimmy Kimmel test. With this one, your child with a preexisting condition will get the care he needs — if, and only if, his father is Jimmy Kimmel. Otherwise, you might be screwed.”

If you too are disappointed in Sen @BillCassidy #GrahamCassidy let them know it – call (202) 224-3121 pic.twitter.com/eswlh6BaoV

In six minutes, Kimmel crystalized exactly what this legislation would do better than anyone I’ve seen try to explain it. The power of pop culture may well be the deciding factor in motivating people to call their senators.

Cassidy appeared on CNN’s New Day this morning and told host Chris Cuomo, “I’m sorry he does not understand. Under Graham-Cassidy-Heller-Johnson more people will have coverage, and we protect those with pre-existing conditions.”

To be clear, under Graham/Cassidy insurance companies will be able to charge those with pre-existing conditions higher premiums. The bill uses very vague language like “adequate and affordable” in describing that coverage but doesn’t legally define what that would mean in practical terms.

.@BillCassidy responds to Kimmel: “I’m sorry he does not understand.” With new bill “more people will have coverage” https://t.co/1wWZe843vC