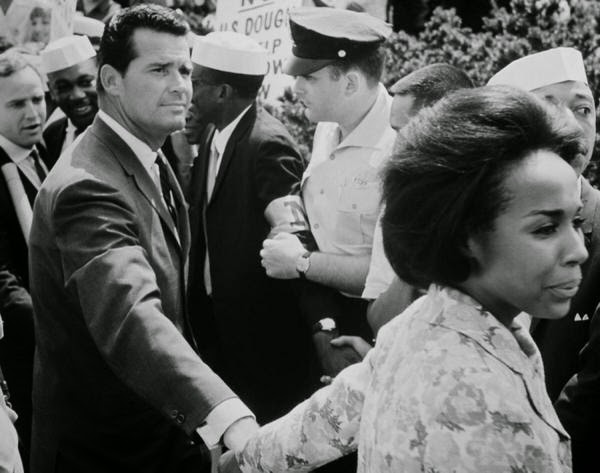 Sadness today as we learn of the passing of film and TV star James Garner.

Thousands of words will be written about his lengthy career as a TV cowboy on the 1950s western “Maverick,” and his 1970s detective series “The Rockford Files.” And rightly so. What he brought to both roles (and many others) was an undeniable star quality grounded in his rugged, athletic good looks. But the tweak that made him unusual and so universally appealing was his unexpected and disarming sense of humor and seeming lack of ego.

The Oscar nominee (for “Murphy’s Romance”) and Emmy Award winner (for “The Rockford Files”) once said, “I got into the business to put a roof over my head. I wasn’t looking for star status. I just wanted to keep working.”

Garner continued to work in his later years, most notably in 2004’s “The Notebook” opposite Gena Rowlands.  He seemed at his best when playing a somewhat flawed but human hero.

What will always stand out for me, though, in addition to the long-running TV shows and hit films, was Garner’s courage to stand up for what he believed in.

At a time when race relations were reaching critical mass, Garner was instrumental in organizing the 1963 March on Washington and often donated to liberal causes.

Jump forward almost 20 years to his role in the cross-dressing musical comedy film “Victor/Victoria,”  which featured him as a Chicago gangster and serious “man’s man” who couldn’t tell if he was falling in love with a woman or a man (played by Julie Andrews). In the early 80s, as the AIDS epidemic was coming to the forefront, lesser Hollywood leading men would have steered clear of a role where the romantic lead was possibly confused over his sexuality. Garner played the part right down the center with no reservations or pulled punches, helping to deliver one of the film’s universal truths that love is love, no matter what they look like or what sex they are.

As an “every man” in Hollywood, James Garner excelled.  But in life, he was more than that.  He was someone that every man would want to be.

Watch the trailer to “Victor/Victoria” below.