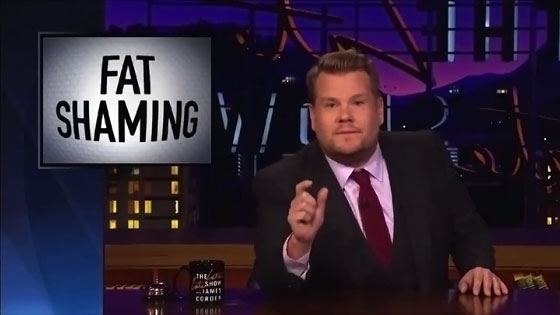 On a recent episode of his HBO series Real Time with Bill Maher, Maher declared it is time to ‘bring back fat-shaming’ in an attempt to help fight obesity.

The broad point of his comments were that Americans – while citing health insurance and healthcare costs as being a top priority for them in the upcoming 2020 election – bear some responsibility for their own health situations due to poor personal choices in diet.

James Corden, host of CBS’ The Late Late Show, wasn’t having it.

“If making fun of fat people made them lose weight, there’d be no fat kids in schools,” Corden said during his monologue on the late night gab-fest. “And I’d have a six-pack right now.”

“Let’s be honest, fat-shaming is just bullying. And bullying just makes the problem worse,” he said.

After addressing some very real aspects of fat-shaming, like triggering depression and self-destructive behavior which leads to more overeating, Corden also addressed some of the root causes of obesity, including how poverty and genetics play a role.

Corden closed out his op-ed with this little nugget of wisdom for Maher: “While you’re encouraging people to think about what goes into their mouths, just think a little harder about what comes out of yours.”

The segment is definitely worth your time. Hit play below.

In fairness, here’s the clip of Maher’s comments in their full context. Decide for yourself if Maher missed the mark or if Corden overreacted.