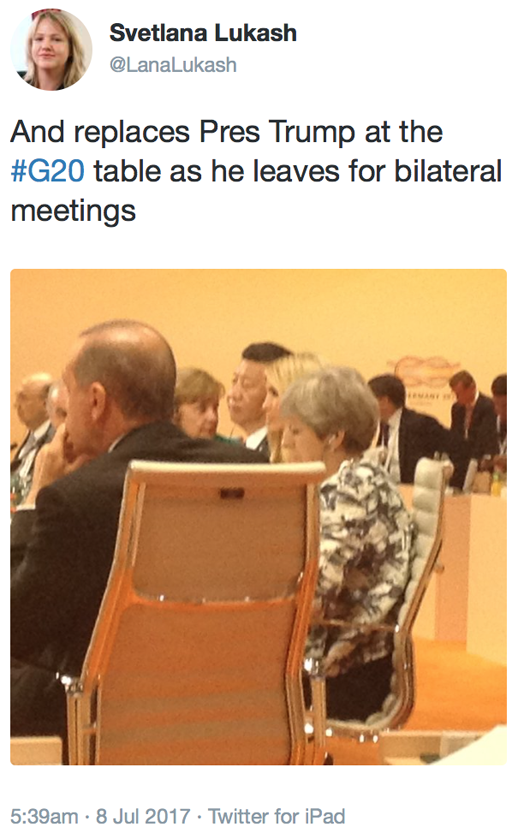 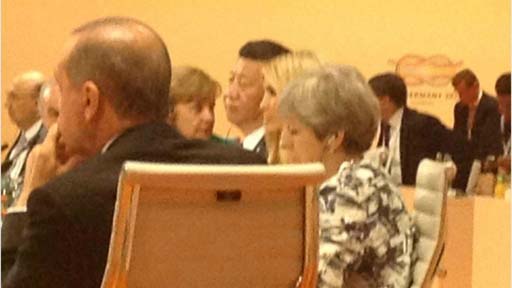 Donald Trump’s daughter, Ivanka Trump, took her father’s seat at the G20 summit today as he stepped out of a meeting.

This is not normal.

Ivanka Trump briefly took her father’s seat at a G20 Summit session on Saturday, sitting next to world leaders including British Prime Minister Theresa May and Russian President Vladimir Putin.

A photo posted to Twitter by a Russian G-20 representative shows Ivanka sitting at the table in place of President Trump.

Cabinet officials usually replace the president at those sessions when a stand-in is needed. But Ivanka Trump, an official adviser to the president, took his place instead.

“Ivanka was sitting in the back and then briefly joined the main table when the president had to step out,” the White House said in response to the photo. The topic at hand concerned one of Ivanka Trump’s projects, the World Bank finance initiative for women entrepreneurs.

Any number of cabinet officials, like Secretary of State Rex Tillerson, could have sat in for Trump. Instead, his daughter, with no qualifications other than her last name, sits down next to world leaders like German Chancellor Angela Merkel, UK Prime Minister Theresa May, Chinese President Xi Jinping, and Turkey’s Recep Tayyip Erdogan.

Ivanka Trump, unelected, unqualified, daughter-in-chief, is representing the US at the G20 summit next to May, Xi, Merkel. Photo @LanaLukash pic.twitter.com/fvs0EMy8z7

Ivanka fills in for her dad beside Xi Jinping. To me, it feels banana-republicky for the US to be represented by an inexperienced daughter. https://t.co/lDDlyCeFp9

What If Hillary Won and Chelsea did this?

This kind of thing happens all the time. In dictatorships. https://t.co/CKiLwhvjDz

Having your daughter step in for you at world leader summits shows how little Donald Trump cares about being president.

If #MichelleObama had sat in for her husband on any high level meetings, Republicans would’ve called for investigations.