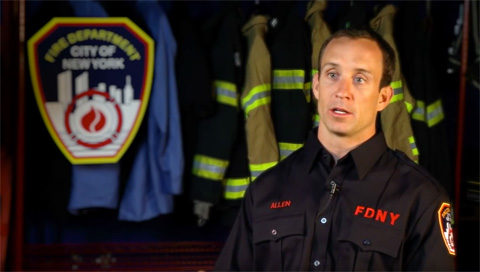 The New York City Fire Department has released it’s first “It Gets Better” video in support of National Coming Out Day 2015:

The Project’s mission is to communicate to lesbian, gay, bisexual, transgender, queer and questioning youth around the world that life gets better, and to create and inspire the changes needed to improve quality of life for them. In the FDNY-produced video, twelve active FDNY Firefighters, Paramedics, EMTs discuss the challenges they faced throughout their lives and the success they have found both as adults, as members of New York’s Bravest.

“As Firefighters, Paramedics and EMTs in the most diverse city in the world, FDNY members have the tremendous opportunity to inspire young people through their brave work every single day,” said Commissioner Nigro. “Through this video, they deliver an important message to lesbian, gay, bisexual, transgender, queer and questioning youth around the world – it absolutely does get better.”