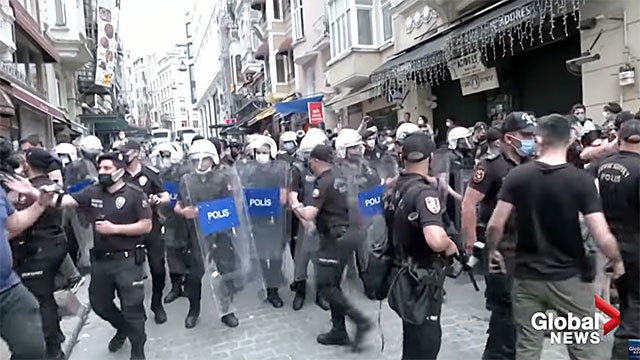 Police fired tear gas and rubber bullets at participants of a Pride March in Instanbul on Saturday, arresting 25 people.

Among those detained was AFP photographer Bulent Kilic.

While thousands gathered peacefully in Berlin, Paris, London, Rome, Milan and elsewhere in Europe for Pride parades, the authorities in Istanbul reacted with a heavy hand to those who gathered in the central Beyoglu district of Istanbul.

The march participants comprised several civil society groups that gathered under the motto “the street is ours.” Footage and photos of demonstrators showed some being pushed and dragged by riot police on Istiklal Avenue in the heart of the city.

Images posted on social media showed photographer Kilic pressed to the ground with police holding him down with their knees.

Reporters Without Borders in Turkey tweeted in support of Kilic, demanding his immediate release. AFP reported Kilic had been released later in the evening.

Authorities in Instanbul have banned Pride events since 2014 when 100,000 showed up for the festivities. Officials say “public safety” was a concern.

It’s been a rough year for LGBTQ advocates in Turkey as elected officials have grown more and more vocal in their opposition to queer communities.

“There is no such thing as LGBT,” said President Recep Tayyip Erdogan in February during an address to his party. “This country is national, spiritual and walking toward the future with these values.”

In March, Erdoğan abandoned the landmark Instanbul Convention because it “normalizes homosexuality.”

This is what’s happening in Turkey today.

When people ask you why #Pride still matters, show them these #OnurHaftası pic.twitter.com/oPtUm82Pfw

Appalling scenes emerging from #Turkey. Despite last-minute banning of @istanbulpride, police brutally attack peaceful #LGBTI+ activists. Our colleague @sariyilmz has taken shelter in a local bar and is currently surrounded by police. pic.twitter.com/glX5FvoiTR

Thousands turned up to celebrate LGBTQ #Pride in cities and towns across the world.

In Turkey, police in riot gear fired tear gas, blocked streets, and arrested more than 25 in an attempt to thwart the parade. pic.twitter.com/lcFztg60SC