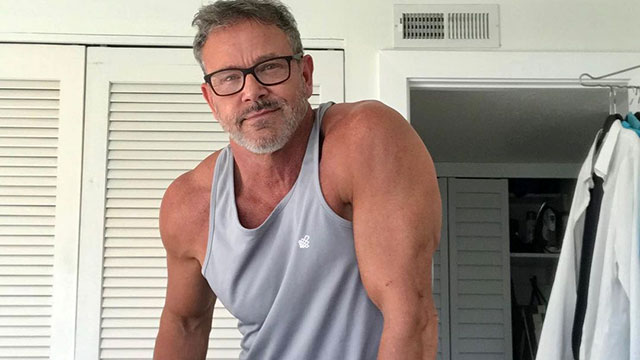 Tom Ernsting, a professional model and event manager with over 153K followers on Instagram, says internet catfish have used his photos to swindle millions of dollars from unsuspecting women.

Ernsting, who is openly gay, told the Detroit Free Press that women he’s never met or communicated with have screamed at him for “ruining their lives” and added, “The stories I’ve heard are insane.”

The woofy silver-haired daddy shared that one woman apparently gave a catfish (posing behind his stolen photos) her credit card information and charged up over $30,000 in purchases.

Some women say they’ve put money on gift cards and sent them to him while others claim to have sent him hundreds of dollars so he could travel to see them.

But Ernsting says he never reached out to any of the women and he doesn’t have their money.

“It’s just crazy,” says Ernsting who feels that the issue seems to have been exacerbated by the coronavirus pandemic. “It definitely took off during COVID because I think people were even more desperate and more lonely.”

“It’s sad because they fall in love with me,” he adds.

After college, Ernsting went to work as a sales executive in the hotel industry but eventually moved into modeling and freelance work as an event manager.

The current COVID-19 crisis put a stop to much of the event business jobs, but thanks to modeling gigs and his growing Instagram following he’s been paid as a social media influencer as well as booking commercials. The handsome 60-year-old was featured on TMZ this summer as a ‘hot dad alert.’

While the problem has been going on for a while, he says he still “can’t believe my image is a business for these people.”

“They’re making a living off my image,” he said. “They’re probably making more than I ever have.”

The website SocialCatfish.com estimates that “millions of dollars were stolen from fake profiles using Tom’s images since there were so many of them.”

The Free Press recommends people Google a person’s name with the word “scammer” if contacted by a stranger on the internet.

AARP suggests folks copy/paste the messages “into a search engine and see whether the same words show up on websites devoted to exposing romance scams.”

The Federal Trade Commission reports that $201 million was lost in 2019 due to online romance schemes, up from $143 million in 2018. In response, the FTC has created a website – ReportFraud.ftc.gov – where people can report catfish schemes or other scams.