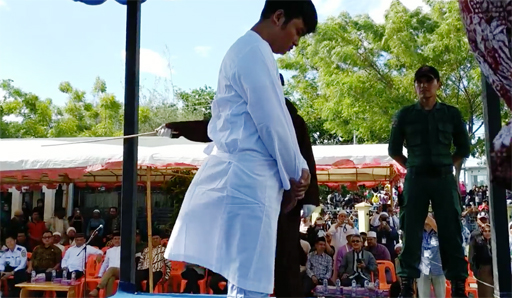 Hundreds of people cheered as a gay couple were flogged more than 80 times in a public square in Indonesia’s Aceh province, where Sharia Law is observed.

A vigilante mob, suspecting the men of homosexual behavior, apprehended the men in a beauty salon earlier this year and handed them over to authorities.

A crowd of about 1,000 people, including tourists from neighboring Malaysia, snapped pictures and shouted “flog them harder” as a hooded figure rained down lashes from a rattan cane on their backs.

The unidentified men were the second gay couple whipped in public this year in Aceh, underscoring the increasing discrimination faced by Indonesia’s small LGBT community.

Aceh is the only region in Indonesia, the world’s most populous Muslim-majority country, that imposes Islamic law. Public flogging is a common punishment for a range of offenses including gambling, drinking alcohol, and having gay sex or relations outside of marriage.

Officials in Aceh had previously announced an end to the practice that has been described as “medieval torture” but, to date, there has been no change in policy.