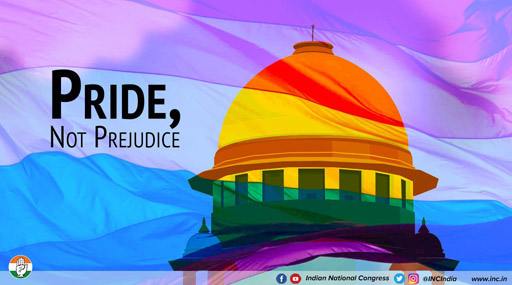 Awesome news from India this morning as the country’s high court has overturned a colonial-era law which made same-sex relations illegal.

In a groundbreaking victory for gay rights, India’s Supreme Court on Thursday unanimously struck down one of the world’s oldest bans on consensual gay sex, putting to rest a legal battle that stretched for years and burying one of the most glaring vestiges of India’s colonial past.

After weeks of deliberation in the Supreme Court and decades of struggles by gay Indians, India’s chief justice, Dipak Misra, said that the colonial-era law known as Section 377 was “irrational, indefensible and manifestly arbitrary.”

“We have to bid adieu to prejudices and empower all citizens,” he told a packed courtroom.

The court said that gay people were now entitled to all constitutional protections under Indian law and that any discrimination based on sexuality would be illegal.

“This monumental decision by India’s Supreme Court finally ends a deeply discriminatory law that violated the dignity and most fundamental human rights of LGBTQ people in India,” said HRC Global Director Ty Cobb. “We congratulate the plaintiffs in this case and the LGBTQ advocates who worked tirelessly for decades to achieve this tremendous victory.”

“We hope this decision in the world’s largest democracy and second most populous country will set an example and galvanize efforts to overturn similar outdated and degrading laws that remain in 71 other countries,” Cobb added.

“The soul of this nation had been bruised and battered because of this archaic law,” said Harish Iyer, an Indian LGBTQ advocate who was involved in the legal challenge to Section 377. “Today, we have reaffirmed our right to our bodies and our right to love. The rainbow flag is proudly hoisted in our hearts and minds as we celebrate this victory.”

With a population of more than 1.3 billion, which accounts for 17% of the world’s population, India is the largest democracy in the world.

Until this ruling, India was the most populous of 72 countries that criminalize same-sex relations.

In 10 countries around the world, homosexual activity may be punishable by death.

We join the people of India & the LGBTQIA+ community in their victory over prejudice. We welcome the progressive & decisive verdict from the Supreme Court & hope this is the beginning of a more equal & inclusive society. #Section377 pic.twitter.com/Fh65vOn7h9