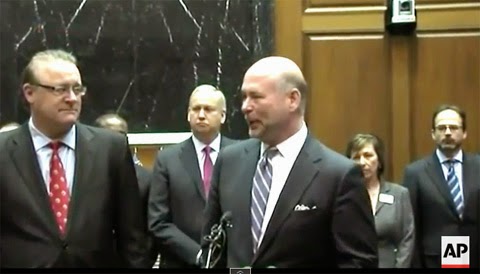 Indiana lawmakers have announced changes to the state’s current RFRA bill that specifies the new religious freedom law cannot be used as a legal defense to discriminate against patrons based on their sexual orientation or gender identity.

Indiana Republicans said Thursday morning that they are presenting an addition to the controversial RFRA legislation that will make it clear no one will “be able to discriminate against anyone at any time.” Senate President Pro Tem David Long, R-Fort Wayne, and House Speaker Brian Bosma, R-Indianapolis said at a press conference at the Statehouse that leaders will present the proposal to lawmakers at 9:30 a.m. after speaking with corporate and civic leadership this week. “Hoosier hospitality had to be restored,” Bosma said.

The leaders referenced the intense backlash that rained down on Indiana after Gov. Mike Pence signed the bill last week. “It was never intended to discriminate against anyone,” Long said. “That perception led to the national protests we’ve seen.”

A legislative report says the RFRA will be amended to say the law “does not authorize a provider to refuse to offer or provide services, facilities, use of public accommodations, goods, employment, or housing to any member or members of the general public on the basis of race, color, religion, ancestry, age, national origin, disability, sex, sexual orientation, gender identity, or United States military service.”

By a vote of 66-30 in the House, and 34-16 in the Senate, Indiana lawmakers have approved changes to the state’s Religious Freedom Restoration Act to allay fears that it would allow businesses to discriminate against gays and lesbians.

The revised law explicitly bars a business from denying services to someone on the basis of categories that include sexual orientation and gender identity.