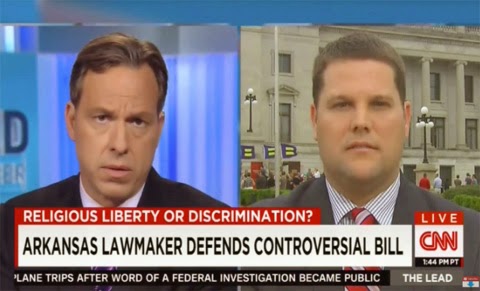 CNN’s Jake Tapper interviewed state Sen. Bart Hester, the sponsor of Arkansas’ religious freedom bill, and asked him multiple times if it allows for discrimination or not.

Tapper expressed his confusion multiple times given all the conflicting messaging from supporters of the bill on the matter.

Bless little Bart Hester’s heart. He was so proud of himself repeating the same word salad over and over.

Clearly the one talking point supporters of these “religious freedom” bills have is “whatever they ask, don’t use the word discriminate.”